Tasmanian State League coaches and captains/player representatives who attended Tuesday’s Media Launch at North Hobart Oval were tasked with getting out their crystal ball and making predictions for the season ahead.

Individuals in attendance were:

The coaches and captains / player representatives were asked four key questions on the season ahead, with the proviso that their individual answers would be treated anonymously to ensure personal views:

As shown below, Launceston are again tipped as being the team to beat, with nine of a possible 12 votes to be Grand Finalist in 2022. Kingborough are expected by many to jump up the ladder, with four votes. North Hobart were also voted by one attendee, indicating that a sleeping giant might be stirring. 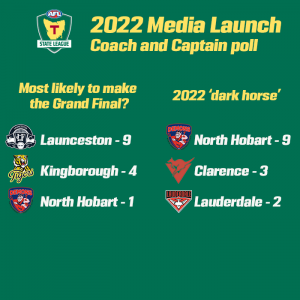 North Hobart were the clear favourite as a competition ‘dark horse’, with nine voters thinking the Demons might be a team to rocket up the ladder this season. Eastern Shore rivals Lauderdale and Clarence were also considered in this category, polling three and two votes respectively.

Returning Tiger Kieran Lovell is expected to rule the roost in 2022, notching four votes to lead all-comers for the Alastair Lynch Medal, with Brad Cox-Goodyer, Jobi Harper and Sam Siggins all finishing with two. 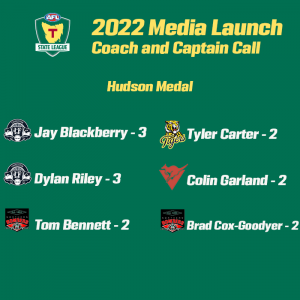