A rejuvenated Glenorchy made ground on the top four, North Launceston produced a dominant second half and Clarence delivered the upset of the season against the ladder leaders. 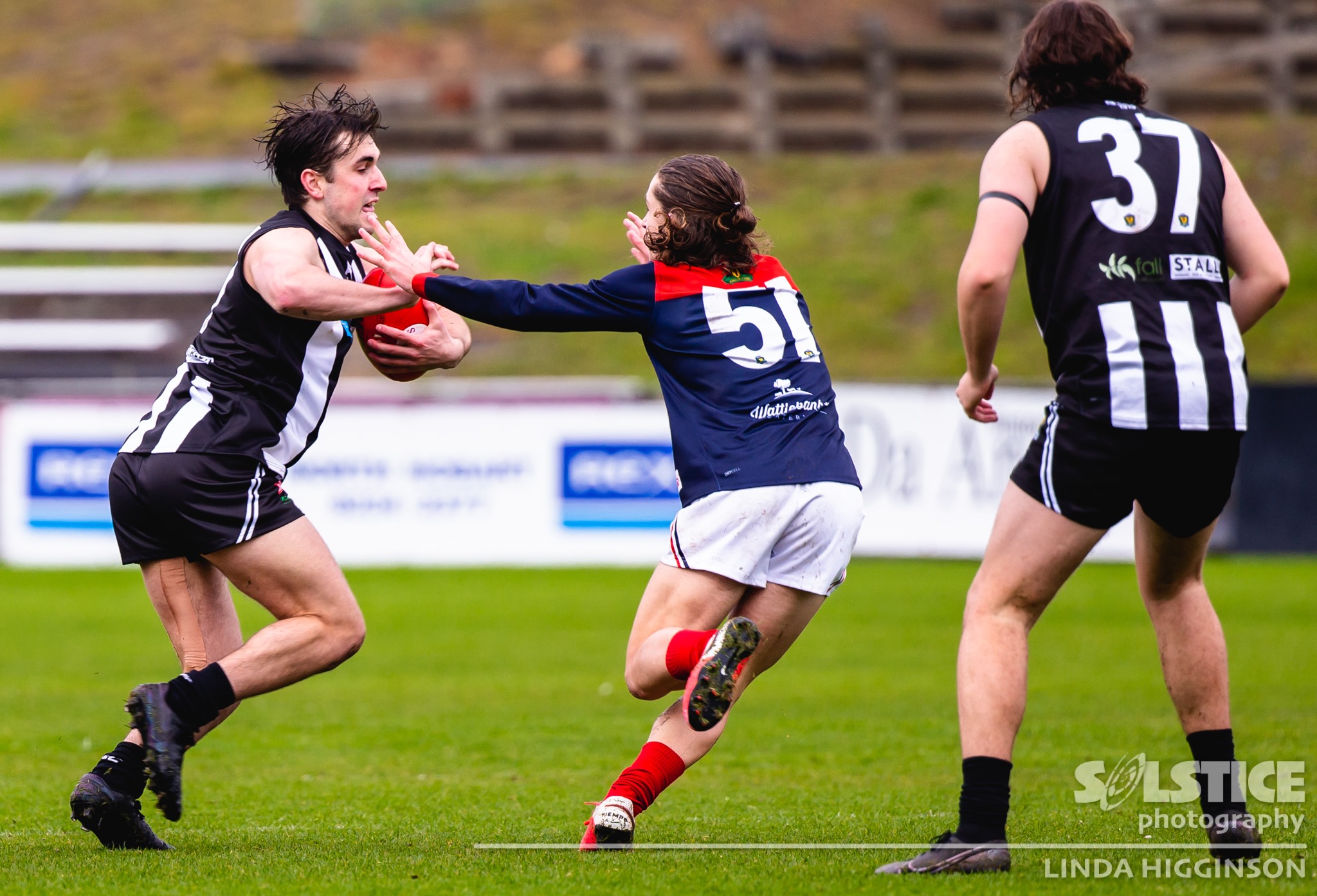 Resurgent ‘Pies too tough for ‘Dees in the wet

Glenorchy enhanced their finals prospects on Saturday, extinguishing the red hot ‘Dees by 18 points at a soggy KGV.

Four unanswered first-half goals set up the ‘Pies 7.8 (50) to 4.8 (32) win, with their experience and toughness showing in the heavy conditions. The hosts adjusted to the conditions better and North Hobart over hand-balled and were unable to get their ball movement of earlier weeks, going.

North Hobart improved after half-time, but couldn’t recover the deficit.

Glenorchy were on from the first bounce, with their intensity, pressure and work rate notably higher than their opponent’s in the wet.

The did the majority of the attacking, with Matthew Joseph and Sam Rundle being the beneficiaries in front of goal.

The ‘Pies continued to hold sway in the second quarter despite North Hobart lifting their level to get more of the ball inside their forward half.

Scoring was hard for both teams in the tough conditions before the Jaye Bowden eventually struck 15 minutes into the term. Joseph soon followed with his second, giving Glenorchy a commanding 24-point lead at the main break.

North Hobart lifted after the major break, finally breaking through with their first goal with Troy Cunliffe quickly provided some relief. After an even contest for most of the quarter, Thomas Reeves converted late to give North Hobart a sniff.

Bowden’s third and a classy finish from young Riley Best quickly snuffed out any hopes of a fightback for Glenorchy in the last.

Bowden (17 disposals, eight marks and three goals) looked like he had a different football from everyone else in the wet.

Ben Kamaric (19 disposals and seven clearances) and Best (16 disposals, four clearances and a goal) set the standard in the middle and skipper Josh Arnold (20 disposals) was a controlling force down back.

Jake Sandric (28 disposals and nine clearances) and Cunliffe (22 disposals and one goal) tried all day, while Hamish Allan (22 hit outs) competed well in the ruck.

North Launceston reminded everyone why they’re the three-time reigning premiers on Saturday, with a strong 56-point win over the Tigers at UTAS Stadium.

A dominant seven-goal shutout in the second half was the difference, with the Northern Bombers skills and experience coming to the fore.

Kingborough couldn’t keep pace after half-time with the Bombers bounding away to leave the Tigers grounded on the bottom of the ladder with just one win to-date.

Skipper Bradley Cox-Goodyer provided the early highlight with a floating snap from the left-forward pocket, with the sides then sharing the next four goals to round out the quarter.

North Launceston kicked the first two goals of the second quarter, while the Tigers struggled to get the ball deep inside their forward 50.

The Northern Bombers controlled the game and threatened to stretch away, but the Tigers kept in striking distance, kicking two of the last three goals to make it just 12 points the difference at the main break.

The Northern Bombers skills were restricted by the wet weather in the first half, but the dry conditions allowed them to show their best, separating themselves from the Tigers who only mustered four behinds in response.

Bart McCulloch was the chief destroyer, kicking four of his five goals in the second half.

Youngster Baynen Lowe added to a great second-game with a goal, while Cox-Goodyer got his second from his signature spot on 50.

Jack Avent (35 disposals and six clearances) was given the job on Kieran Lovell. Avent not only limited Lovell’s output, but was the best player on the ground.

McCulloch (five goals) was the star up forward, while Cox-Goodyer and coach Taylor Whitford were deadly all-game, running through the middle and pushing forward.

Despite being tagged, Lovell (21 disposals, 11 clearances and two goals) still made a big impact on the contest.

In one of the most bizarre TSL games ever, Clarence kicked their lowest score in over a decade, but managed to deliver a one-point upset of the season against Launceston at Windsor Park.

Saturday’s game had the league’s lowest ever match score and winning score, but the only record the ‘Roos would care about is the 2.5 (17) to 1.10 (16) scorecard.

A Luke Swinton goal in the last 30 seconds put Clarence in front for the first time all game, securing a historic victory without their captain Brady Jones and two of their best young players, Oliver Davis and Noah Holmes.

The Blues unbeaten streak went up in flames, left to rue their inaccuracy in front of goal.

A snap from former Launceston skipper Jay Blackberry got the home side going early in the first quarter, but it wasn’t a precursor of things to come.

The game devolved into a tight congested struggle, with no more goals kicked in the first half.

Clarence’s tackling pressure and defending was immense, continually restricting and hounding the Blues.

Launceston only took an eight-point lead into half-time, despite the majority of the game being played in their forward half.

A hot start to the second half from Clarence got them their first goal of the game, with Christopher Nield converting a rare set-shot.

From there Launceston dominated the term, driven by Brodie Polfreyman, the Blues had numerous opportunities on goal but only had five behinds to show for it, despite having shots from only 10-20m out.

Clarence started to control more of the game in the last term, but Launceston’s backline held firm, only conceding two points to bring the margin under a goal.

With less than a minute to go Blackberry gave away a kicking in danger free to Clint Riley, who then passed it to Luke Swinton.

In just his third game for the ‘Roos, the former Lindisfarne product had ice in his veins, nailing the goal to give Clarence a memorable win.

Jobi Harper (31 disposals and 13 clearances) was the most dominant player on the ground, with Blackberry (15 disposals, eight clearances and one goal) accompanying him.

Ryan Tyrrell was the Blues’ best defender, shutting down the dangerous Josh Green.

Clarence coach Jeromey Webberley (23 disposals) thrived down back, Nield (one goal) looked dangerous in a low-scoring contest and Ethan Jackson (15 disposals and five clearances) was industrious.

This match looms as a season-defining clash for both teams.

Lauderdale and the Tigers were finalists last year, but both are currently outside the top four.

The Bombers took a three-game losing streak into the bye and will be hoping that the week off is the circuit breaker they need to get back on track.

The Tigers are currently on the bottom of the ladder, making a move against last year’s Grand Finalist could get their season going.

Their last meeting was to decide the 2019 wooden spoon but this time around the fortunes are looking brighter for both teams, North Hobart and Clarence are the league’s two biggest improvers in 2020.

This game became a lot more interesting after last round’s two upsets, with either side on the opposite end.

The Dees hit a road bump last week in what has otherwise been a great start to the season and will look to recover against the ‘Roos.

Clarence is now inside the top four and will need to bring the same pressure and effort that saw them trump the ladder leaders.

Two of the TSL’s strongest and proudest clubs will meet on Saturday, in a match that has major finals ramifications.

The Magpies recovered from a poor start to the season and could find themselves back in the top four by the end of the round.

The Northern Bombers have returned to some of their best form in recent weeks and will look to make up ground on Launceston in the top four.

Launceston has the bye