The Tigers got their first win for the season, North Launceston flexed their muscles in the Grand Final rematch and Launceston prevailed in a 1 v 2 heart-stopper against North Hobart. 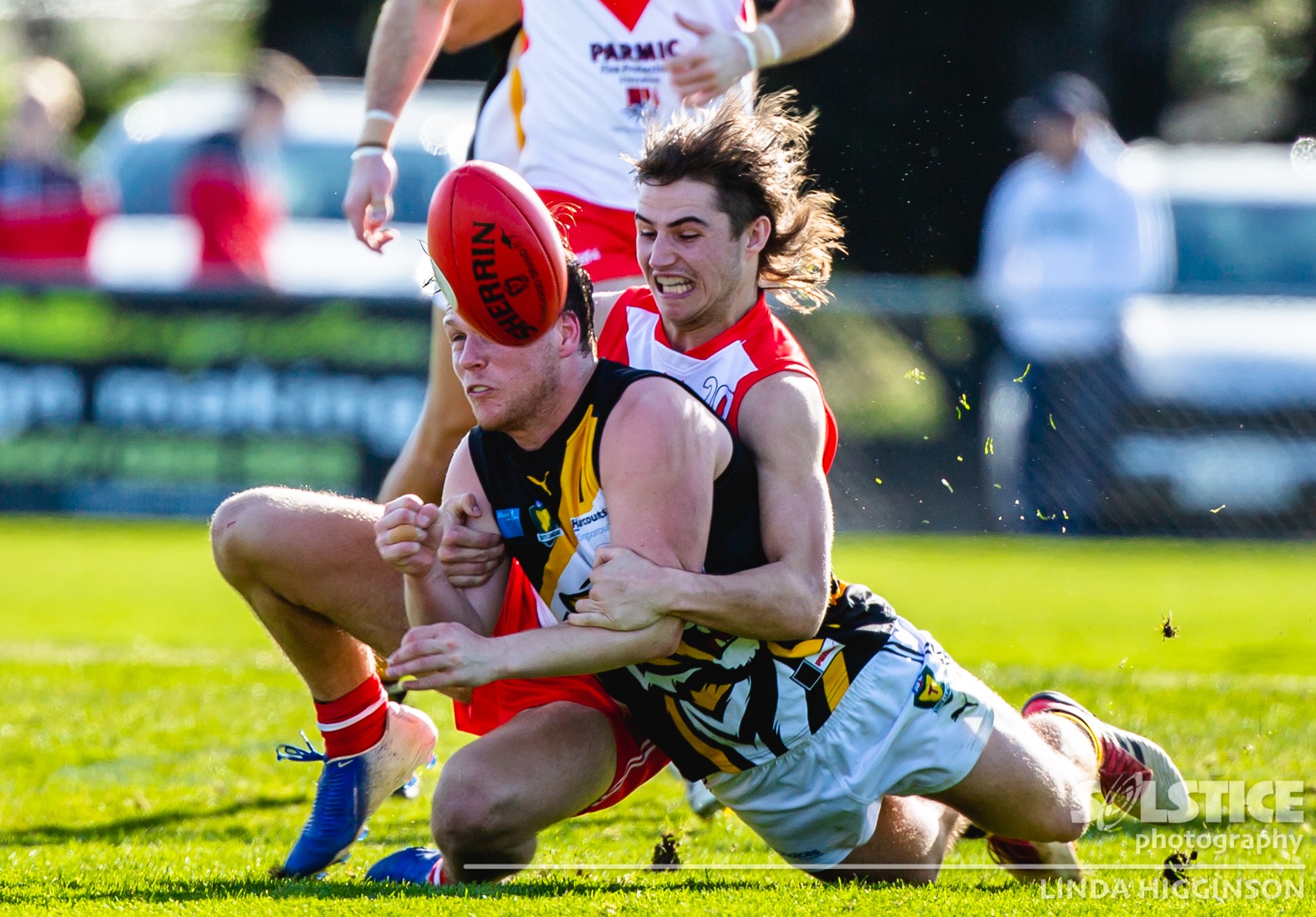 The Tigers got the monkey off their back, securing their first win of the season over Clarence by 15 points at Richmond Oval.

A nine-goal first half set-up a 12.5 (77) to 9.8 (62) win. The young ‘Roos went down swinging with five unanswered goals in the final quarter though, likely sending a slight shiver through the Tigers’ camp.

The Tigers wasted no time in getting started, with Tyler Carter registering the first major in the opening minute.

Kieren Howlett provided the quick response for Clarence, but Kingborough took control from then on. The Tigers piled on four more goals for the term, which included Carter’s second, to open up a healthy four-goal buffer.

Clarence got some relief after quarter-time, when Josh Green found the big sticks for his first before Howlett got his second.

It was a short-lived response for the Roos as the Tigers kicked four more unanswered goals to end the half.

Luke Graham got involved with two goals, Edward Burrows-Cheng provided a classy finish and Carter got his third, giving the Tigers a near-unassailable 36-point lead at half-time.

Graham opened up the second-half with a banana from the pocket for his third of the game. Jack Bilson and Oliver Preshaw both kicked majors before Kieran Lovell got in on the action to round out the third term, adding to what had already been a dominant individual performance.

Preshaw provided a bit of magic for the ‘Roos by getting a toe to the ball in mid-air on the goal line, which was an indicator of things to come in the final term.

The ‘Roos kicked the remaining four  goals of the game in a last term onslaught, while keeping the Tigers to just one point.

Green got his second and third and Jarrod Harper snapped truly, unfortunately for the Roos the hill was too steep to climb, going down by 15.

Kieran Lovell continued his excellent form with a best on ground performance, putting him up there with Jobi Harper as the best player in the competition right now.

Will “Soup” Campbell has been Lovell’s partner in crime since returning from injury. The pair have formed an excellent midfield duo, with Campbell’s tough inside work around the contest.

Marcus Gardner gave them first service with his 31 hit outs.

Draft hopeful, Oliver Davis, was Clarence’s best player in defeat with his strong work in the middle.

Josh Green (three goals) had his best game since returning to the ‘Roos and Oliver Preshaw was exciting up forward with his two. 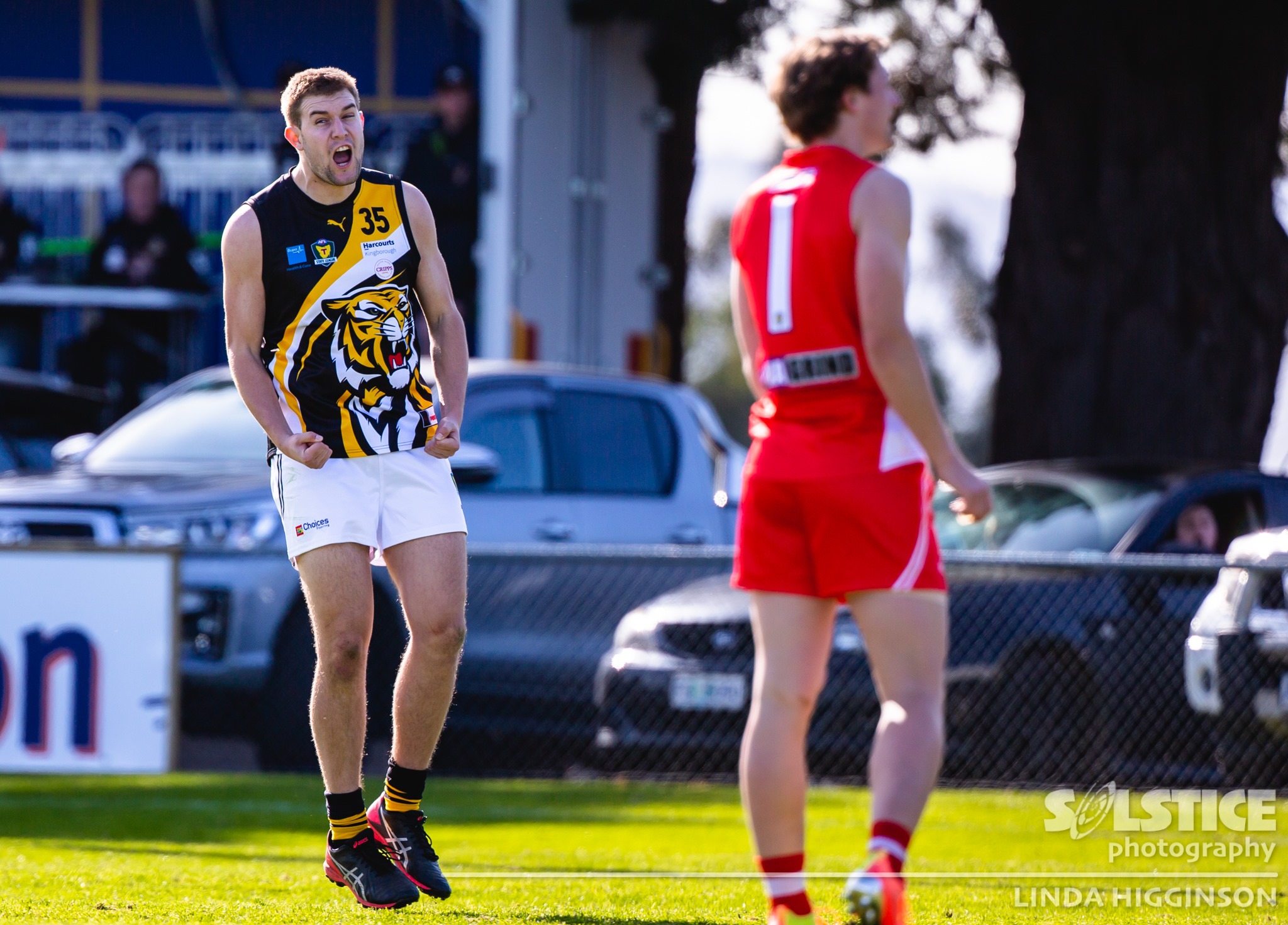 North Launceston put in their best performance of the season, taking down fierce rival, Lauderdale, by 26 points at Skybus Oval on Saturday.

After a tight contest in the first half, the Northern Bombers broke the game open after half-time with a six-goal to two second-half, seeing them victorious, 10.7 (67) to 6.5 (41).

The Southern Bombers head into the bye on a three-game losing streak, after only kicking four goals, five goals and six goals in their last three games respectively.

After a spirited and congested start to the game, Luke Nelson soccered through a goal to get Lauderdale on the board.

North Launceston were able to find their young key forward, Jackson Callow, on the lead and he made no mistake from 45m out.

The Southern Bombers started to get on top late in the quarter, which resulted in Nelson getting his second goal to round out the term.

Despite Lauderdale having the momentum heading into quarter-time, it was North Launceston who came out firing through their big men.

Late inclusion, Bart McCulloch, took a strong contested mark to set-up his first and the impressive Callow followed suit a couple of minutes later with his second.

Toutai Havea was infringed on in the marking contest which resulted in his first to break North Launceston’s control over the game.

Daniel Withers and Bryce Walsh exchanged goals to end the first half, with North Launceston holding a one-point lead at half-time.

The Northern Bombers started to pull away after the main break, with a three-goal blitz to start the third term.

Alex Lee and his midfield group got on top in the centre of the ground, with Josh Ponting, McCulloch and Whitford (after a 50m penalty) all benefitting on the scoreboard.

Lauderdale got going in the latter half of the term and slowed the game down, but only benefited with one goal through Nelson’s third.

After an even start to the final quarter, debutant Baynen Lowe kicked his first goal in the TSL to extend the Northern Bombers lead.

Nathan Oakes took a courageous mark ten minutes later and made no mistake, giving the Southern Bombers a slight chance.

Jay Foon was allowed to be unmanned in the right forward pocket, allowing Jakob Laskey to set-up him up for an uncontested mark and snap on goal.

Alex Hevey then gave away a 100m penalty to gift Sherrin Egger a certain goal, putting the final nail in the coffin.

Potential AFL draftee, Jackson Callow, hands were as strong as vices. He made an impact up forward with two goals, before being moved down back in the second-half and competing strongly.

Ruckman Alex Lee was one of the most dominant men on the ground, he was the primary factor behind North Launceston’s second-half surge and made his presence felt around the ground.

Josh Ponting was strong, as usual, through midfield, while late inclusion Bart McCulloch secured his spot back in the side with two goals

Josh McGuinness (11 marks) was a prominent force for Lauderdale off half-back, particularly in the first half.

Phillip Bellchambers provided a strong contest further up the ground, while Nic Baker and Will Poland held firm down back.

Undefeated Blues hold on against ‘Dees in a thriller 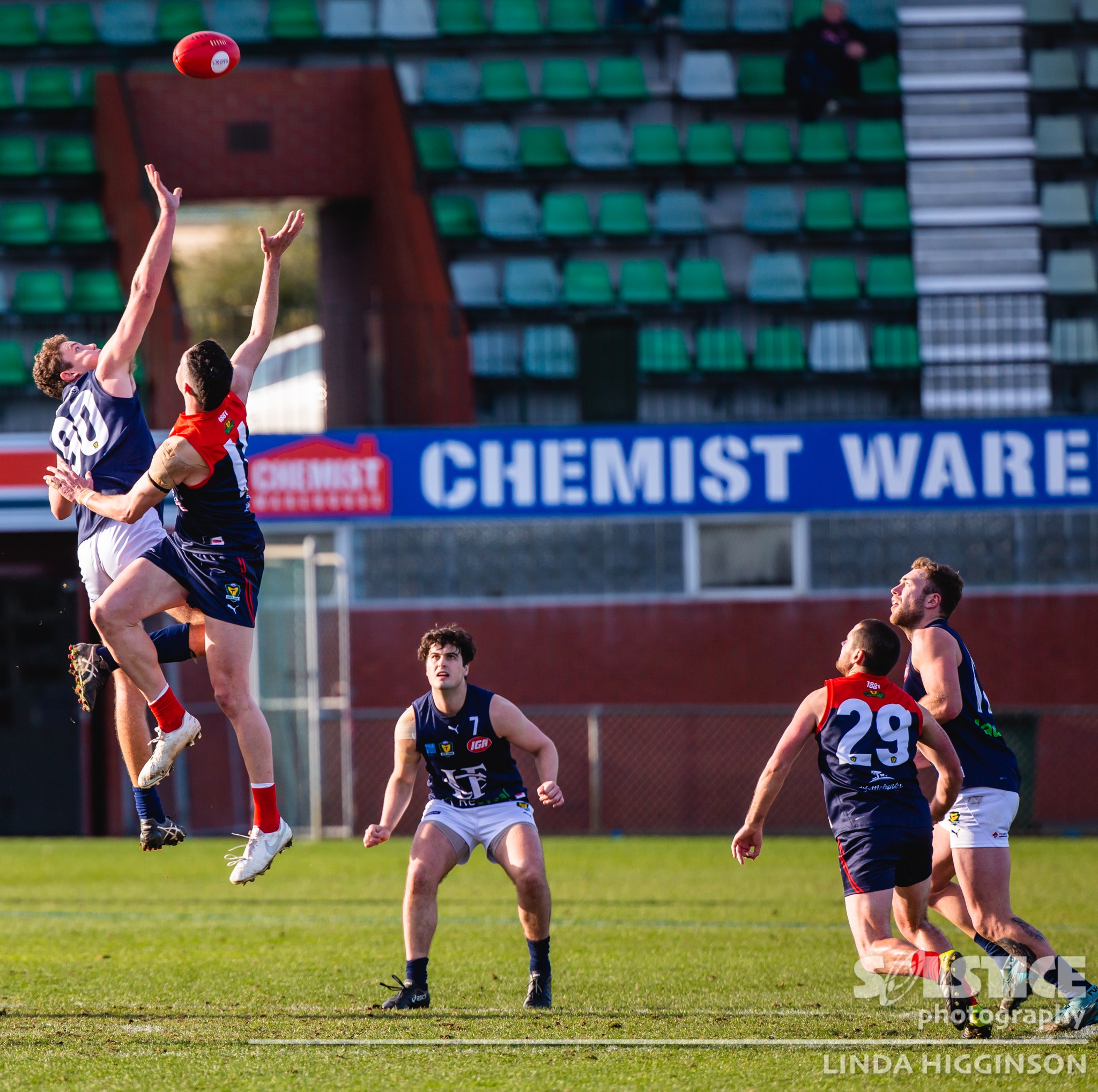 Launceston added to their five-game winning streak, with a nail-biting three-point win against North Hobart in a game befitting of first versus second.

The game opened up after half-time with an entertaining 10 goal third quarter, with Launceston eventually triumphant, 9.7 (61) to 9.4 (58).

The Demons legitimised their status as a potential finalist, pushing Launceston further than anyone else has this season.

North Hobart started strongly with a flying snap on goal from 45m out by Troy Cunliffe sailing through the big sticks.

After a break in-between goals, Alec Wright got a “joe the goose” in the goal square for Launceston’s reply.

The ‘Dees would finish the quarter off stronger, with Jacob Steele and Patrick Walker (courtesy of a 50m penalty) finding the goal.

The Blues responded in the opening minutes of the second term, with Jake Hinds taking a strong mark and converting.

The scoring dried up from there though, North Hobart failed to register a point all quarter and Launceston only added three behinds.

Both teams had opportunities, especially Launceston who were wasteful and missed gettable shots, seeing North Hobart take a two-point lead into the main break.

The game got hit new heights after half-time, 10 goals were kicked in the third term in the most exciting quarter of the season.

Dylan Riley was the star, he kicked all of his four goals in the third quarter, including a magical few minutes where he kicked three in a row.

There were five lead changes in the quarter, with Wright, Nathan Hardy, Callum Kilpatrick also getting involved.

The first goal of Riley’s three-goal blitz marked the fifth lead change, with his next two opening up a 17-point buffer for Launceston.

Hamish Allan and Kilpatrick managed to peg the margin back, before Jack Donnellan extended it before three-quarter time. 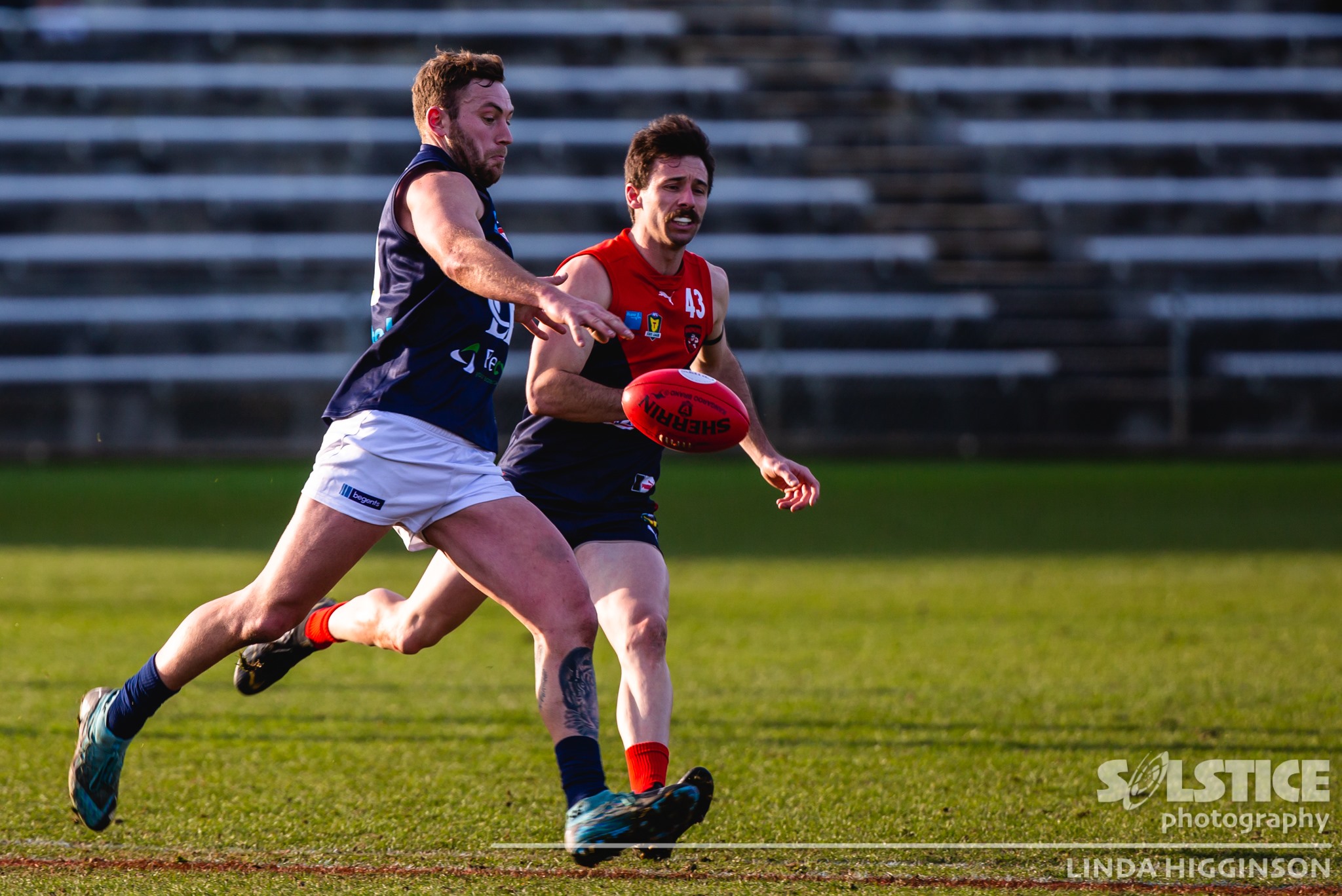 Cunliffe opened the final quarter with his second, making it just five points the difference. Donnellan managed to provide the response again a few minutes later, with a neat snap from the right pocket.

After several tight minutes, Hardy took a strong contested mark and converted his second, bringing the margin back to four points.

The next ten minutes were a tense struggle, with both teams having opportunities on goal.

Jye Menzie had an opportunity to put North Hobart in front in the last couple of minutes, but shanked the shot and to not make the distance.

Launceston got the ball inside their forward half where the siren sounded on a gripping victory.

Dylan Riley, who is currently leading the Hudson Medal, was ultimately the difference with his four-goal third-quarter performance.

Experienced hands Jay Blackberry and Fletcher Seymour (in his second game back) were outstanding through midfield.

Young ruckman Hamish Allan had his best game of the season and got the better of Tim Auckland.

Bailey Walker was as solid as a rock down back, keeping Mitch Thorp goalless for the game.

Round 6 kicks off with Glenorchy hosting North Hobart, a game with massive finals implications for both teams.

Despite being last on the ladder, the ‘Pies will be feeling rejuvenated from their first win of the season and some rest over the bye.

The ‘Dees lost no fans in defeat, but need to back up their performance if they want to secure a spot in the top four.

Two finalists from last year will lock horns when North Launceston and the Tigers meet.

The Northern Bombers put in their best performance of the season against Lauderdale and will look to continue this trend at home.

The Tigers will be buoyed after getting their first win of the season last week, can they make ground on the top four by upsetting the reigning premiers?

A classic underdog fight as a young Clarence side looks to take on the might of Launceston.

The Blues are two wins clear on top of the ladder and can complete a clean sweep heading into the bye by beating every team in the competition.

The ‘Roos have been competitive in most of their games this season and will look to bring this same effort against the ladder leaders.

Lauderdale has the bye