Glenorchy got their first win of the year in a heart-stopper, North Launceston got the four points over Clarence and Launceston flexed their flag credentials.

Glenorchy secured their first win of the season in nail-biting fashion, beating the Tigers by just one-point at Twin Ovals on Saturday.

The Tigers came home with a wet sail only to fall agonisingly short and now face the uncomfortable reality of being the only winless team in the competition.

The two teams felt each other out for the first 10 minutes, before Bailey Gordon took the play-on advantage to get the first goal of the game.

Matthew Joseph responded with a strong contested mark and made no mistake to open the ‘Pies account, and Jaye Bowden quickly followed with his first from on 50.

The game was played in Glenorchy’s forward half for the rest of the term, but they couldn’t find the goals.

Glenorchy made a hot start to the second term. Bowden opened the second quarter with his second, and hard-nut Mitch Rainbird was rewarded for his tackle on Kieran Lovell and kicked truly.

The ‘Pies controlled the game for the majority of the term but the Tiger stood up against the heat to stay in touch. They got two late goals through Jack Bilson and Sam Duigan to cut the margin back to 10 points at half-time.

The game opened up after the main break, with 11 goals scored in a see-sawing third term. The teams exchanged majors to open the term, before the brilliant Bowden stood up once again with two consecutive goals, opening up a handy 20-point buffer.

The Tigers rallied with the next four goals, noticeably stepping up their game around the contest with Lovell leading the way. A goal from Luke Graham on 50 gave them the lead, before Tyler Carter extended it to 10 points with his second.

Richard Dilger soccered through a momentum breaker for Glenorchy and when Bowden converted after the siren it gave ‘Pies a one-point lead back.

Glenorchy continued their momentum from the end of the third with Braidy Simpson and Callum Thompson sharply kicking the first two goals of the last.

The ‘Pies managed to maintain this lead for the majority of the term, but Lovell went to yet another level, slotting two goals to bring the margin back to just one-point.

It was too little too late, with the siren sounding a minute later to give Glenorchy the win.

Jaye Bowden reminded everyone why he’s a living legend of the competition. The veteran kicked five goals and added another accolade to his already overflowing resume, getting the Anzac Day Medal for being the best player on the ground.

John Geard (eight marks) came in as an emergency and was tough around the contest and through the middle.

Kieran Lovell did everything but get his team the four points. He finished the day with 28 disposals, eight clearances, nine inside 50s and two goals.

North Launceston got back to their winning ways, with a 15-point win over Clarence at UTAS Stadium on Saturday.

The Northern Bombers were sitting pretty until mid-way through the final term, when a late surge from the ‘Roos required a reply of their own to seal the game, leaving as 7.12 (54) to 6.3 (39) winners.

Clarence hung in there for most of the day and provided a scare late with young key forward Noah Holmes starring with four majors.

Holmes kicked his first of the day inside the first term with a terrific clearance honouring his lead. North Launceston quickly replied, after young gun Jackson Callow nailed an incredible banana goal from a tight angle.

The teams’ traded goals again, when Clarence coach finish Jeromey Webberley finished off a nice bit of end to end footy from his side, and Zac Burt converted an easy goal from a 50m penalty.

Jack Rushton broke the trend late in the term with his first, giving the Northern Bombers the lead in the process.

The next two quarters were a tight struggle, with only three goals scored. North Launceston were the more dominant side, but were wasteful in front of goal.

Clarence didn’t get many looks, but held firm down back to stay in the contest.

Tom Bennett took a strong mark in front of goal and converted towards the end of the second term, giving North Launceston a 17-point lead at half-time.

No goals had been scored halfway through the third term, before ruckman Ryan Bailey showed his diverse set of skills by crumbing and snapping a goal, the ‘Roos first since midway through the first term.

North Launceston’s coach, Taylor Whitford, steadied with a reply a few minutes later when he roved the ball off the ruck contest and snapped truly, to push the lead back to 19 points.

The final quarter started much like the first, with Holmes taking a mark and converting in the opening minutes.

But it didn’t stop there, Holmes found himself marking and lining up for goal two more times a few minutes later, and he nailed both opportunities.

All of a sudden the Northern Bombers lead had been reduced to one-point with plenty of time left on the clock but after several tense minutes, their experience came to the fore.

Rushton crafted his second snag from the goal square and skipper Bradley Cox-Goodyer nailed a goal from his signature spot on 50 to seal the game.

Big man Alex Lee was the most dominant man on the ground, winning the ruck contest and giving first service to North Launceston’s midfield.

The experience of Josh Ponting (31 disposals) and Cox-Goodyer in the guts shined through for all day.

Noah Holmes was almost the hero for Clarence, after anchoring a last quarter comeback with his four goal performance.

Ethan Jackson got his hands to the ball plenty of times throughout the day and James Holmes was strong down back. 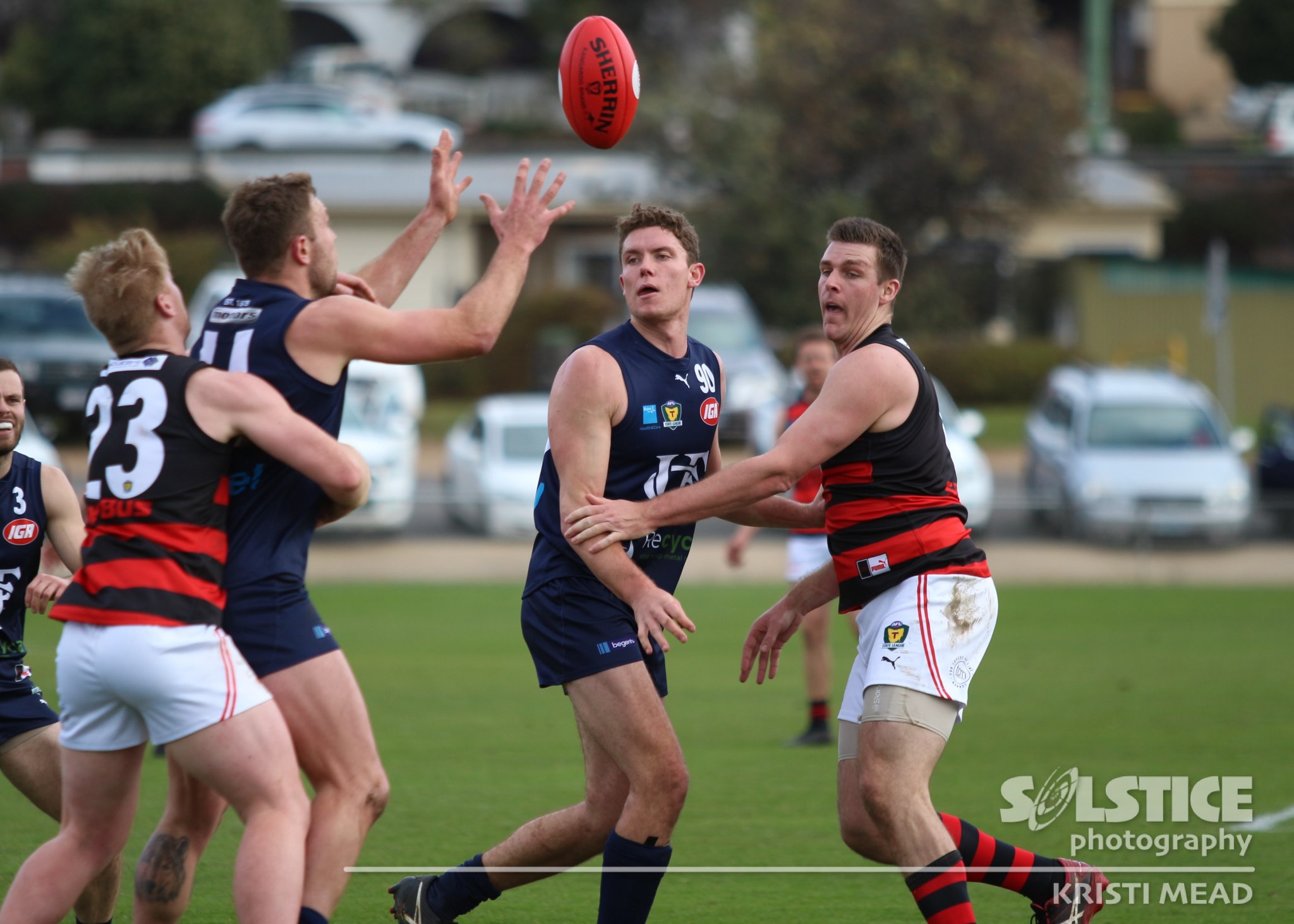 Launceston knocked off last year’s runners-up and continued their undefeated streak, with a 22-point win over Lauderdale in a scrappy slog at Windsor Park.

A three-goal buffer opened up by the Blues in the first quarter proved to be the difference throughout the game, with the home side ultimately leaving as 9.8 (62) to 5.10 (40) winners.

The Northern Bombers were just held at arm’s length for most of the day, left to rue their missed opportunities in the second quarter.

It didn’t take long for the Blues to get started, after Jared Dakin finished off a coast to coast movement.

Lauderdale quickly responded through Nat Franklin, who weaved his way through a pack of players to send a snap sailing through the goals.

The rest of the term belonged to Launceston who repeatedly and rapidly surged the ball forward, skipper Jobi Harper snapped truly and Dylan Riley rounded out the quarter with two goals.

No more goals were scored for the half, with inaccuracy the theme for Lauderdale with six behinds for the term. Launceston went into half-time with a two 14-point lead.

The second-half started before the ball was even bounced, a scuffle between Bryce Walsh and Jake Hinds resulted in Hinds getting a free and 50 to set-up a certain goal to start the half.

The Blues would end up getting the only other goal of the quarter through Alec Wright, in a tight defensive struggle of a term that saw the Southern Bombers go goalless.

Lauderdale threatened a comeback early in the last, after Kalcovski and Rhys Sutton converted crucial goals in the opening minutes, making it just 16 points the difference.

Riley quickly snuffed out the fight back with his fourth, providing a steadier for the home side.

Jack Donnellan was rewarded for his tackle a few minutes later and kicked what was ultimately the sealer.

Former Blues skipper, Jay Blackberry, was influential in the midfield. After spending most of his time up forward recently, he was moved up the ground and it paid dividends.

Riley was the most dangerous forward on the ground with his four goals and strong marking.

Jake Smith was as solid as rock down back, holding Toutai Havea goalless.

Bryce Walsh played a vital team role for the Southern Bombers, sacrificing his own game to keep Harper quiet. This resulted in Harper, the form player of the competition, having his least productive game of the season so far.

Haydn Smith’s experience came to the fore in the ruck and Josh McGuinness was impressive as always off half-back.

Round 5 starts with an intriguing clash between the Tigers and Clarence, with both teams believing that they are a chance over the other.

Kingborough will need to regroup and rally after Saturday’s heartbreak if they want to kickstart their season.

After a good fortnight, the ‘Roos will be sensing a real opportunity against the win-less Tigers.

After facing off in the last three Grand Finals, any match between these two teams is must-watch.

Neither team has hit their best form so far this season, but they still loom as serious contenders.

The Southern Bombers will look to rebound after two straight losses, while the sting of last year’s third straight Grand Final defeat would still linger.

The Northern Bombers got the job done against the ‘Roos, but a strong performance against their recent rival would remind everyone why they should still be feared.

Not many people would have predicted that this match would be first versus second when the fixture came out, but the two form teams of the competition will square off in the match of the round on Saturday.

Refreshed after the bye and playing on their home deck, the Demons will give themselves every chance to knock off the ladder leaders.

The Blues haven’t put a foot wrong this year and would only enhance their flag favourite status by taking down the surprise story of the competition.

Glenorchy has the bye