Launceston continue to firm as early flag favourites, Clarence christen Richmond Oval in style, the Deadly Demons take a scalp AND two finalists from last year are in dire straits.

Launceston reinforced their status as the league’s top team in emphatic fashion, after completing an 82-point demolition of the Kingborough Tigers at Twin Ovals, on Saturday.

The game was effectively won in the first quarter, as the Blues piled on six goals without answer.

The Blue’s forward half pressure was on display early and it started to pay dividends later in the quarter, with Michael Musicka taking a strong contested mark and snapping truly to deliver their first.

Mitch Thorp set up Dylan Riley with a joe the goose in the goal square, before the coach asserted himself on the contest with two goals of his own inside a minute.

The Tigers managed to get some repeat inside 50s in the middle of the term, but never looked like scoring.

Jake Hinds rounded out the quarter with two late goals, including a finish from the boundary and a set shot after the siren. The margin at the first change was an unassailable 37 points.

The Tigers were more competitive after quarter-time and managed to stem some bleeding but it wasn’t reflected on the scoreboard.

They went goalless across the next two terms, while the Blues continued to dominate around the contest due to the work of bull Jobi Harper and ruckman Tim Auckland.

In the second quarter, Riley got his second goal of the game and Thorp rounded out the first half with another two goal quarter, making it a formidable 60-point lead at half-time.

The trend continued in the third quarter, with Launceston playing most of the quarter in their forward half.

Riley got another gift in the goal square, Harper added another tick to his day with a simple running goal from 20 metres out and Brodie Palfreyman converted after being set-up by Thorp.

Riley got the first goal of the last quarter, capping off a strong individual performance where he kicked a goal in each quarter.

Elijah Reardon delivered a tiny bit of relief for the Twin Ovals faithful, saving embarrassment with a good contested mark and goal to finally get the Tigers on the board.

Luke Graham quickly followed up with a classy finish from the boundary line, helping the Tigers avoid their lowest score in TSL history.

Jack Donnellan got on the end of a rolling ball inside 50 to make sure that the dominant visitors had the last say on the game. 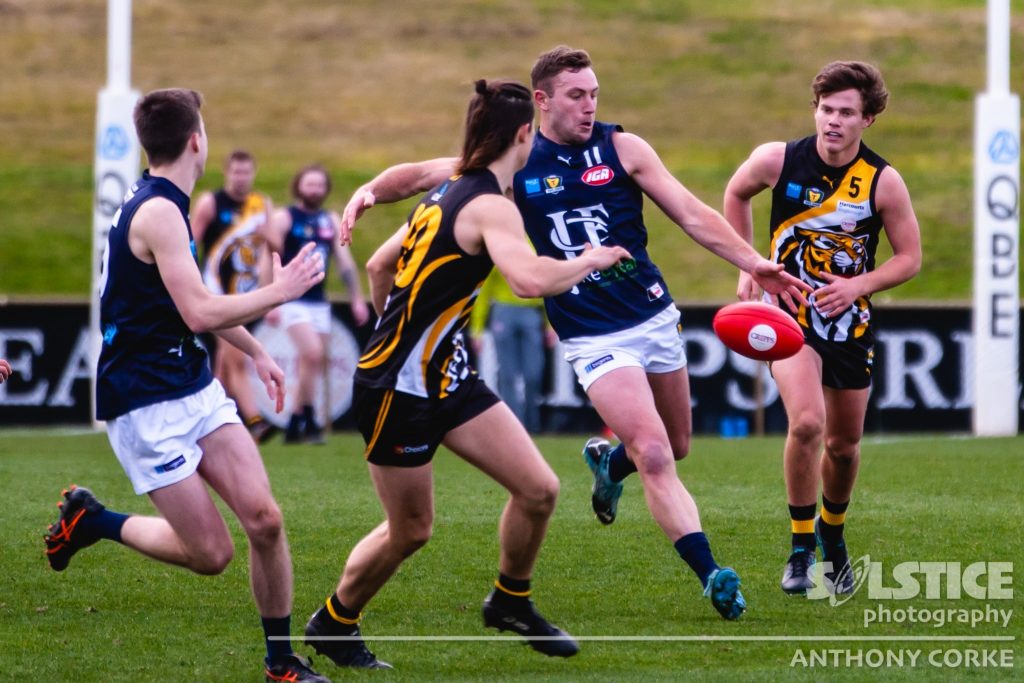 Much like his team, Launceston skipper Jobi Harper has reached new heights in 2020.

The inside bull produced a masterclass on Saturday, with a 36 disposal, 23 contested possessions and one goal game.

The equal runner-up in last year’s Alastair Lynch Medal, it would be surprising if Harper isn’t leading it at this stage.

Coach Mitch Thorp was dominant on return, booting an equal game-high four goals and setting up his fellow teammates.

Tim Auckland held sway in the ruck with his 44 hit outs and gave first service to his midfield group.

Blake McCulloch and Jarryd Drew (nine rebounds) battled manfully for the Tigers under constant pressure down back, with Drew being swung forward in the third quarter.

Clarence made Richmond Oval feel just like home on Saturday, with a dominant 78-point win over their arch-rival Glenorchy.

Saturday’s result was the continuation of an alarming trend in Glenorchy’s game, they have now gone goalless in over half of their quarters this season and sit on the bottom of the ladder.

The game started with a bang, the Roos got around Luke Swinton, after he dodged and weaved around Pies defenders to kick the first goal of the game and his first goal in the TSL.

An ensuing scuffle broke out, which resulted in a free kick to Clarence coach Jeromey Webberley who took full toll. 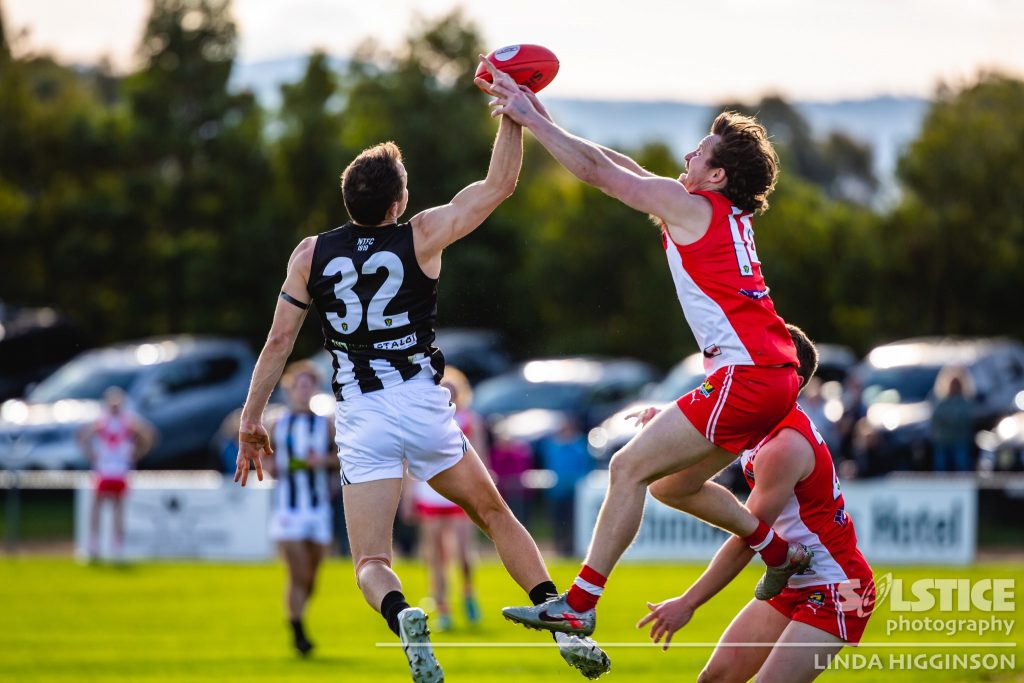 There wouldn’t be another goal until midway through the term, when Clint Riley was rewarded for his good tackle and kicked truly.

After a 10 minute stalemate in the second quarter, the crowd came alive when star recruit Josh Green’s lead was honoured and he nailed the goal. 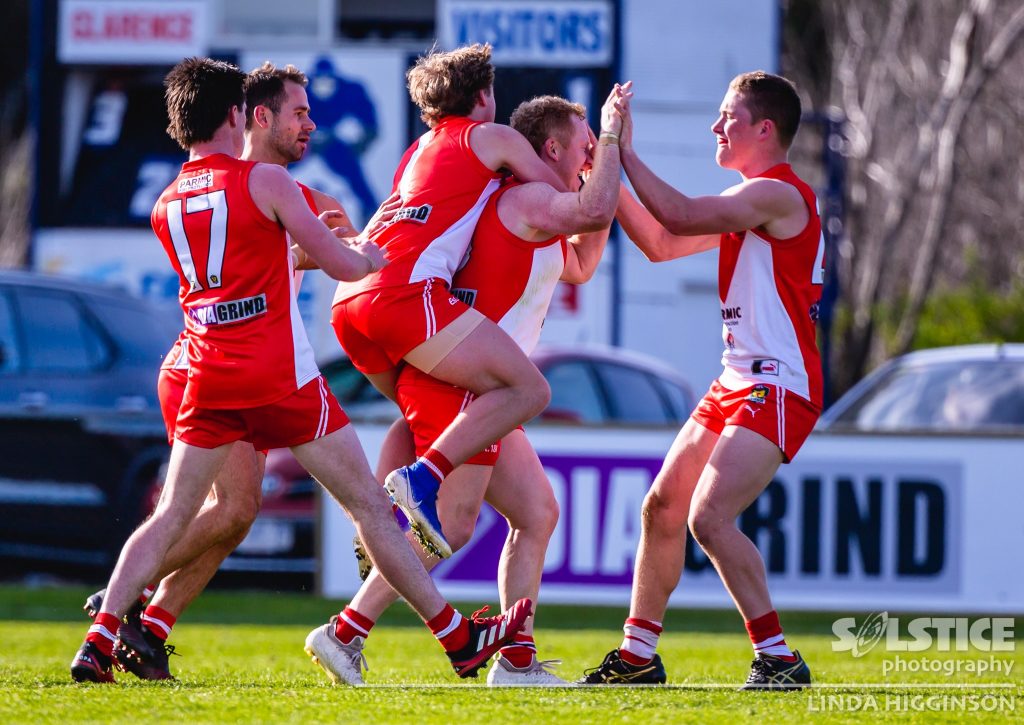 The remaining goal of the term came when Jarrod Harper shrugged a tackle and finished off his good work, giving Clarence a 33-point lead at half-time.

Injury was added to insult for the visitors, as Glenorchy’s wretched run with injury continued with reigning Hudson medalist, Aiden Grace going down with a nasty ankle injury.

Glenorchy’s woes continued after half-time, when big man Ryan Bailey got pushed in the back near goal and converted.

Matthew Joseph finally found the big sticks in the third quarter, for the ‘Pies first and only goal of the game.

Oliver Preshaw profited from a free in the marking contest and a 50m penalty given away by Zac Webster, but then quickly showed that he didn’t need any help to find the goals, after taking a mark on the boundary line and nailing a tight set shot for his second of the term.

The domination continued in the final quarter, when Preshaw dribbled through his third, Dylan Howlett got his second via a 50m penalty and Webberley sent the crowd home happy with his finish from the right forward pocket.

Zac Buechner anchored a near-perfect defensive performance with his work down back, while Ryan Bailey and Sam Green formed a great partnership in the ruck, Green was particularly impressive with his work around the ground.

Zac Webster and Josh Arnold battled all day down back, while Mitch Rainbird was strong around the contest with 12 clearances, in a dark day for the Magpies. 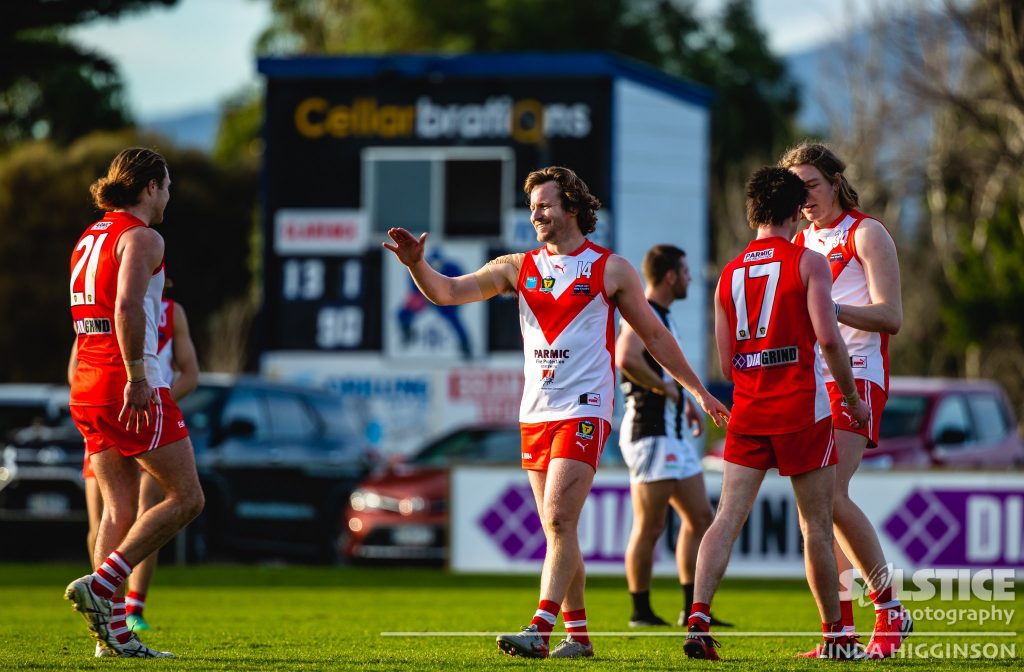 North Hobart made it two on the bounce have secured their biggest win in years, downing Lauderdale by 34 points at North Hobart Oval on Saturday.

The first quarter was a tight tussle, with plenty of pressure on the ball carrier and some uncharacteristic mistakes from Lauderdale.

In an arm-wrestle of an opening term, both teams traded missed opportunities on goal, before Tom Reeves intercepted the ball and drew first blood for the hosts.

North Hobart were milliseconds away from adding to the margin but were denied another goal when the quarter-time siren sounded just as Baxter Norton was running into an open goal.

The Dees played most of the second quarter in their forward half but couldn’t make it count on the scoreboard, with captain Nathan McCulloch getting the only goal for the majority of the term.

Young key forward Jake Steele grows in confidence with every outing for North Hobart and he provided the highlight of the half with a fantastic pack mark. 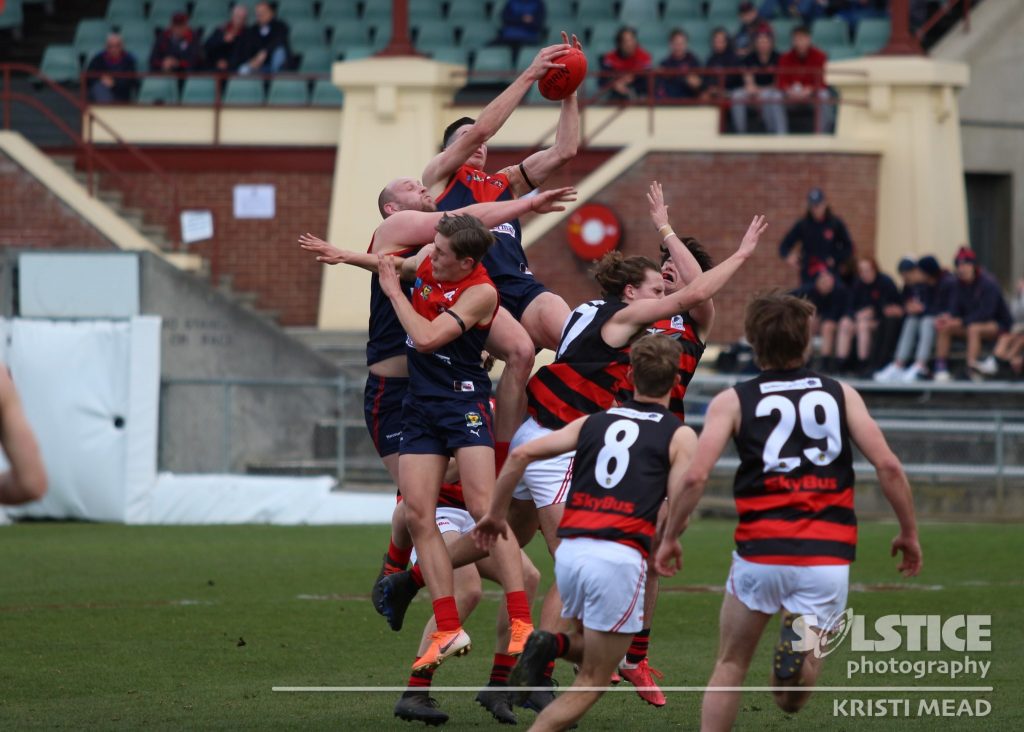 Lauderdale broke through late with Sam Siggins and Robbie McManus kicking two quick goals to give the visitors the lead.

Electric small forward Jye Menzie had the last say of the half, reclaiming the lead for North Hobart by four points at the half.

North Hobart made their move in the third stanza with a brilliant burst. They started to stretch away from the four-minute mark in the third quarter, kicking four goals in the space of seven sizzling minutes.

Nathan Hardy kicked two goals, including a brilliant pluck and snap from the ruck contest, while Menzie and Reeves both got a second.

No more goals were scored for the quarter, with the ball caught in between the arcs.

Despite the 30-point buffer at three-quarter time, North Hobart were made to sweat early in the final term when Nick Baker and Luke Nelson found the goals.

But the young Dees held firm with Troy Cunliffe kicking a steadier to snap the Bombers’ momentum. Jeffrey Fisher then put it beyond doubt with a beautiful fake and finish before Menzie signaled party time, finishing off a good team goal.

Nathan McCulloch, the big bruising captain and Jack Sandric were both industrious in the middle of the ground.

Troy Cunliffe and Baxter Norton continued the high standards they’ve set for this season with their work around the ball and forward of centre.

Will Poland and Josh McGuinness toiled hard down back, while Luke Nelson showed glimpses in his first game in the TSL. 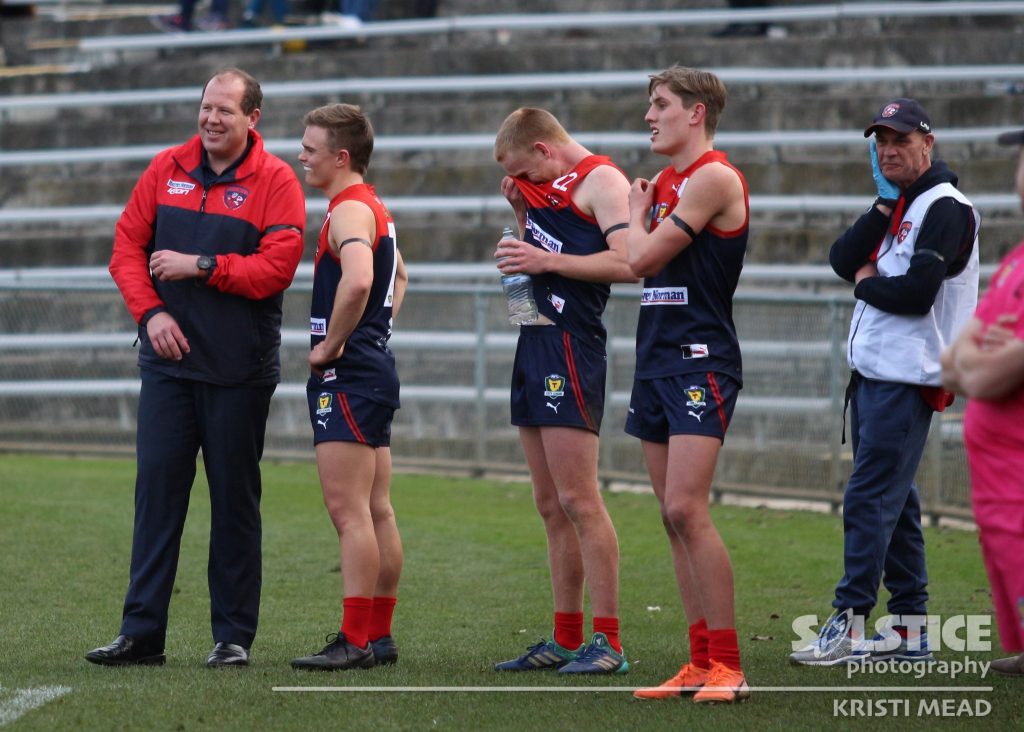 The most important match of the round for all the wrong reasons.

These two finalists from last year are both winless in 2020, with Saturday’s game looming as a season-defining clash.

Glenorchy are the walking wounded with a laundry list of injuries, but the alarm bells are officially sounding after last week’s one-goal effort.

The Tigers are facing similar problems after their thrashing to Launceston, with genuine question marks over how they’ll back-up their inaugural finals appearance from last year.

This game became very intriguing after Clarence’s upset win over the weekend, with both teams now entering the match with one win and one less for the season.

The reigning premiers will be looking to rebound after their loss to Launceston prior to the bye and remind everyone why they’ve owned the league for the last decade.

Clarence will be up and about after taking down their arch-rival, believing they can take another big scalp on Saturday.

A rematch from last year’s thrilling Preliminary final, this game looms as another bumper clash between these two sides.

Both teams will fancy deep September action once again and this game having major finals ramifications in a shortened season.

Launceston are now the only undefeated team in the competition and the early Premiership favourite, beating the runner-up of the last three years would only further frank this title.

Lauderdale suffered their first loss of the season last week, but can reassert their Premiership credentials by knocking off the league’s form team on the road.

North Hobart has the bye