While the TSL returned last week, the season truly arrived on Saturday with three bumper games and one of the most enthralling rounds in recent memory.

North Hobart cemented their improved status, Lauderdale rallied from a third term scare to make it two in a row, and Launceston broke a near seven-year-long drought while further establishing their Premiership credentials.

It was 19th time is the charm for Launceston, downing their fierce cross-town combatants North Launceston by 19 points at Windsor Park on Saturday.

The Northern Bombers were always in the contest, but could never snatch the lead and as a result lost their stranglehold and bragging rights over the Blues.

Skipper Jobi Harper (21 disposals) kicked off proceedings with a sharp running checkside goal, before North Launceston skipper Bradley Cox-Goodyer quickly outdid him with a trademark booming finish from outside 50.

The teams’ continued to split the goals with two apiece for the rest of the term, ensuring that scores were tied at quarter-time.

Launceston upped the tempo in the second quarter, but it didn’t translate on the scoreboard.

They kept the Northern Bombers to just one behind but only managed one goal of their own late in the quarter through Dylan Riley, taking a 10-point lead into the main break.

The Blues started to stretch away after the main break by opening up a 21-point lead, with two goals in a minute from captain Jay Blackberry blowing the game open.

Jackson Callow performed well and made the most of limited opportunity, taking a great clunk and steering home his second of three to keep the Bombers in the contest.

Cox-Goodyer ignited his team in the final term with a scrambling goal off the deck, and emerging star forward Callow stood up once again to bring the margin within single digits.

The Blues found another gear to kick away with Jake Hinds kicking two late sealing goals in the dying minutes putting some icing on the cake.

Launceston playing-coach Mitch Thorp backed up the boldness he showed at the selection table during the week when he dropped long-time ruckman Hamish Leedham, after he left himself out of the side to allow for a quicker forward line.

Young ruckman Tim Auckland (36 hitouts) rewarded the faith Thorp showed in him by getting the best of the ruck contest.

Jarod Dakin did a great job by restricting the dangerous Taylor Whitford to just nine touches, while Jobi Harper and Fletcher Seymour (27 disposals) were dominant in the engine room.

Jackson Callow was a strong target up forward for the Northern bombers with three goals, Jay Foon continued to thrive in midfield (16 disposals), and Branden Van Buuren (six rebound 50s) was a stabilizing presence down back.

Lauderdale triumphed in a nail-biting contest against Glenorchy, coming from behind at three quarter time to win by 12 points at SkyBus Oval on Saturday.

It was a rematch of last year’s epic Qualifying Final in more ways than one, with the game going down to the wire once again.

Lauderdale got off to a hot start with Jarrod Westell and Toutai Havea hitting the scoreboard in the opening minutes. Glenorchy stabilised and managed to get a goal of their own through Matthew Joseph.

Lauderdale were on top in the second quarter, with current Hudson medal leader Havea sending home his second.

Glenorchy could only manage one behind for the term, but their defence held firm, stopping the margin from blowing out beyond 15 points at half-time.

The game came alive after the main break, with Glenorchy exploding with seven goals for the quarter to turn the game on its head. The Pies shared the love around, with Aiden Grace being the only multiple goal kicker for the term.

The Southern Bombers did enough to stay in touch, kicking three goals of their own at crucial times during the quarter, including a leg-break bouncing goal from Nick Raglione.

The ‘Pies lost the explosive Ben Kamaric to a hamstring injury which seemed to halt the Magpies momentum.

Lauderdale held sway in the final quarter, but were wasteful with shots on goal and their entries inside 50.

Glenorchy hung onto their lead for most of the term and worked feverishly down back, but failed to find the big sticks again.

Big man Hayden Smith, in his 150th  game, eventually broke through and levelled the scores.

In the final stages, Adrian Kalcovski nailed a running checkside goal to put Lauderdale in front and Tyler Martin delivered the death blow just before the siren.

Adding to Glenorchy’s pain was John Geard and Ben Kamaric both going down during the game, adding to an already extensive injury list, while Ryan Banks-Smith will miss three matches for his bump on Mitch Anderton in the final term.

Smith celebrated his 150th in style by dominating in the ruck, while Kalcovski (26 disposals) was strong in the middle.

Havea cemented his status as one of the league’s most dangerous forwards with another three goal performance.

Josh Arnold (23 disposals) was as a pillar down back, standing up against multiple entries inside 50.

Zac Webster provided a spark for Glenorchy after he was moved into the middle with his 31 disposals. 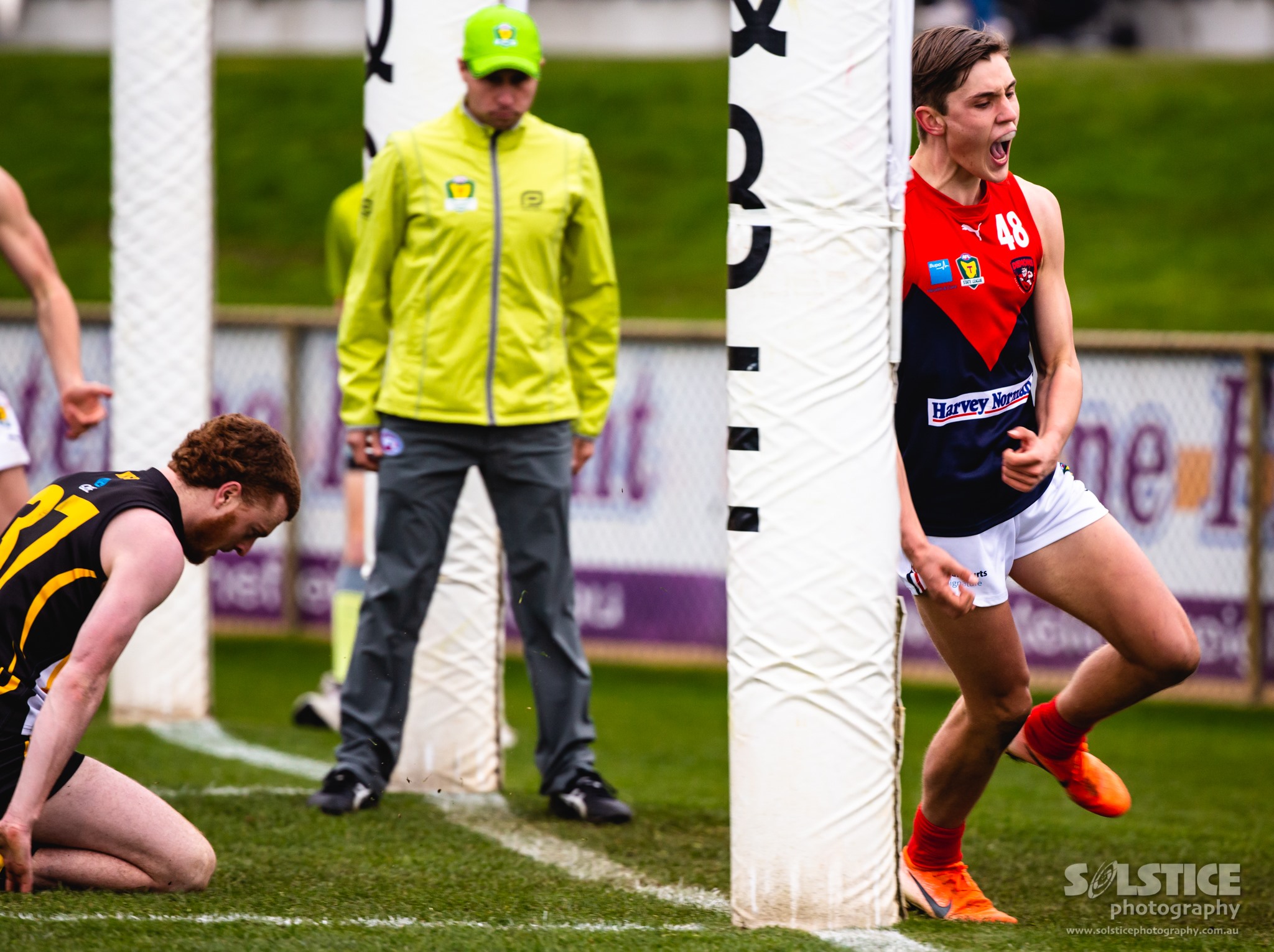 ‘Dees edge Tigers to claim their first scalp of the season

North Hobart recorded their first win for the year, overrunning Kingborough by 10 points at Twin Ovals.

The Demons only hit the lead for the first time in the final quarter after surviving a see-sawing contest to prevail as 12.3 (75) to 9.11 (65) winners.

The reigning wooden spooners had to wait until Round 14 to register their first win last season but in a demonstration of their improvement broke through in Round 2.

The opening term belonged to the hosts and small forward Luke Graham had the hot hand, kicking the Tiger’s only two goals for the term, looking back to his opportunistic best. While Troy Cunliffe executed a textbook crumb and goal to get the ‘Dees on the board.

The highlight of the game came midway through the term, when Elijah Reardon took to the skies and pulled down an absolute screamer. A mark many believe to be one of the best seen in the TSL.

The second quarter gave way to a competitive arm wrestle, with both teams kicking two goals and one behind for the term.

The Tigers were generally more composed with ball in hand and took their nine-point lead from quarter-time into the main break.

Kieran Lovell was a dominant force in the opening half before Sam Caswell was moved to the former Hawk to quell his influence.

The game opened up after half-time, with eight goals kicked in the term.

Kingborough looked to be rolling early in the quarter with Kieran Lovell finding plenty of the footy but some lapses in judgment and some ill discipline opened the door to North Hobart, who were deadly efficient inside 50.

Graham and Tyler Carter added to their goal tallies, while Nathan Hardy proved himself as more than a handy late inclusion with his second and third goals for the game.

Every time the Tigers tried to stretch away, the ‘Dees would peg them back and when Hardy goalled right on the siren it left things all tied up at the final break.

Kingborough were strong out of the huddle, but it was young Patrick Walker who kicked the first of the last to give North Hobart the lead for the first time. The youngster impressed in a new role inside 50.

Tigers key forward, Cooper Sawdy quickly responded with two goals in a minute, to open up a seven-point buffer for the Tigers, as it looked like Kingborough would run away with it.

A costly free allowed Baxter Norton to make it a one-point ball game, before Troy Cunliffe soccered through his second to give the ‘Dees the lead back.

In the dying stages young ruckman, Hamish Allan, stood strong with a big contested mark in the goal square and converted to ice the game.

Undisciplined free kicks and wayward shots on goal cost the Tigers, while the ‘Dees made the most of every opportunity.

AFL draft hopeful Patrick Walker demonstrated his ability to play up the ground and kicked two goals of his own.

Jarryd Drew (nine marks and seven intercepts) was a force down back with his constant intercepting. Lovell also had a productive game despite falling away in the second half, gathering 27 disposals.

The Tigers and Blues will lock horns on Saturday in a rematch of last year’s Elimination Final.

Launceston are riding a wave of momentum after their great start to the season and are looking like a true Premiership contender, but can’t afford to take the Tigers lightly.

Kingborough showed some good signs in defeat, but need to get some wins on the board if they want to back-up their inaugural finals appearance from last year.

This classic rivalry will be reignited on Saturday, as the Kangaroos and Magpies meet for the first time this season.

Glenorchy wouldn’t have lost any fans in defeat after their blistering third quarter, but a win on Saturday is crucial to kick-start their 2020 campaign, especially in a shortened season.

Clarence have had a week to stew on their loss to Lauderdale and will play their first game at their home away from home for the season, Richmond Oval. What better way to christen it then by upsetting their arch-rival?

Not a lot of people would have pegged this as the match of the round when the fixture was released, but this clash between the Demons and Southern Bombers looms as the most intriguing game of the season so far.

Both clubs have looked good in each of their two games and are the only southern teams to have wins on the board in 2020.

Lauderdale have been a perennial challenger over the last few seasons and don’t look like stopping anytime soon.

North Hobart are the most improved team in the league and would frank this title by knocking off one of the competition’s heavyweights.

North Launceston has the bye