The Wrest Point Tasmanian State League Women’s (TSLW) Team of the Year has been selected.

All six Wrest Point TSLW clubs were asked to nominate players they believed worthy of Team of the Year consideration. An assembled panel then selected the best 20 of the 2019 season.

TSL W matches are played with 16 on the field. The selection panel picked the team and positions as if the team were to play a game. 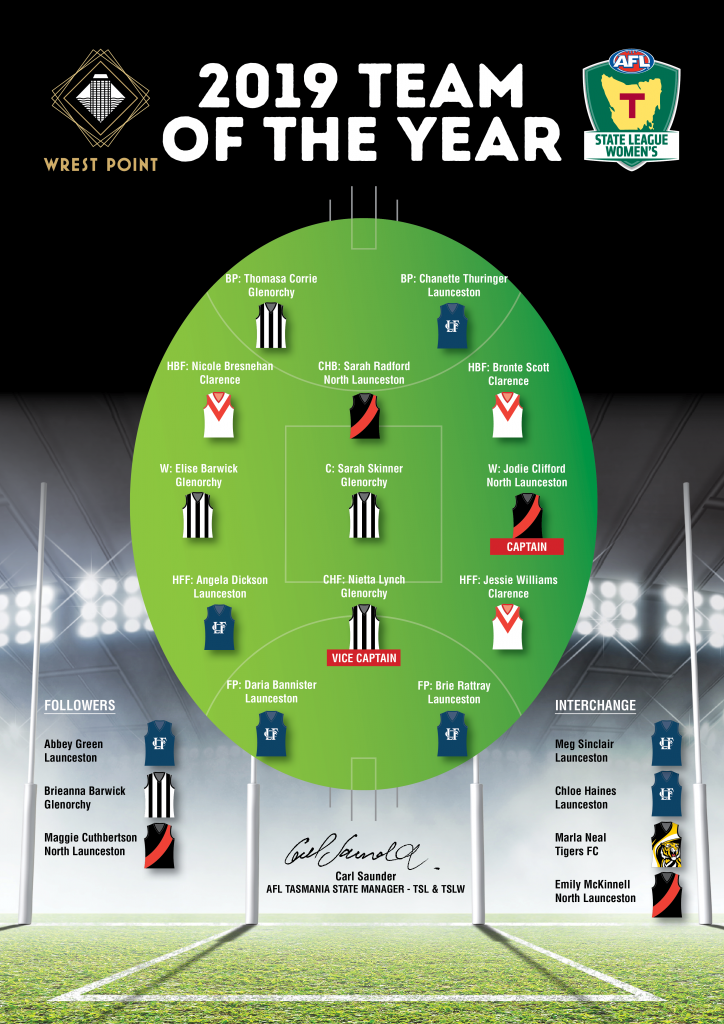 Thomasa Corrie (Glenorchy)
The 2017 competition best and fairest winner has had an outstanding 2019 campaign, showcasing her ability to control a game from half back. One of the league’s best users by hand and foot, Corrie is rarely beaten one-on-one. A third straight Wrest Point Team of the Year nod.

Chanette Thuringer (Launceston)
One of the competition’s best readers of the ball, Thuringer is a strong mark both contested and uncontested. Loves to take the game on with precise kicking and strong run and carry. A true backline leader who can also damage as an offensive weapon. Like Corrie, now a three-time Team of the Year member.

Nicole Bresnehan (Clarence)
The North Melbourne AFLW player has settled into an attacking half back role this season with Clarence and played it with aplomb. A fierce tackler and strong mark, Bresnehan nails the delicate balance between defence and offence, often pushing further afield to become another ball-winner at the source. A three-time Wrest Point TSLW Team of the Year member.

Sarah Radford (North Launceston)
A rock in defence, Radford has delivered the goods at centre half back for much of the season. Rarely beaten, Radford has stood tall against many of the competition’s power forwards.

Bronte Scott (Clarence)
A ball magnet, Scott has emerged as one of Clarence’s most consistent performers this season. Capable of winning the ball on the inside or providing a touch of class on the outer, Scott has regularly been one of the Roos’ very best. A well-deserved debut Wrest Point TSLW Team of the Year appearance.

Elise Barwick (Glenorchy)
Barwick’s athleticism and work rate makes her a valuable player in both attack and defence and the prototype winger. Marks well overhead and is a clean user with ball in hand. Has kicked 10 goals from 15 games to be named on the wing for a second straight year.

Sarah Skinner (Glenorchy)
Consistently one of the competition’s premier midfielders, Skinner is a clean user and marks strongly overhead for her size. Skinner has a knack for finding plenty of the football, with a lot of this coming down to her strong work rate. Can also hit the scoreboard with 21 goals for the season. This is the former Burnie player’s third appearance in the team.

Jodie Clifford (North Launceston) – CAPTAIN
A standout performer in North Launceston’s inaugural Wrest Point TSLW season, Clifford has been a terrific leader for an inexperienced group, steering the side to finals action. A hard-working midfielder, Clifford is a classy player with a knack for finding the football at will.

Angela Dickson (Launceston)
The Launceston coach has delivered another consistent season, kicking 21 goals as a crafty midfielder / half forward. Dickson’s agility and pace off the mark makes her a tough matchup, while her precise skills and capacity to hit the scoreboard make her a valuable asset to this team for a third year.

Nietta Lynch (Glenorchy) – VICE CAPTAIN
The competition’s leading goalkicker in 2018, Lynch has again led by example to help steer the ‘Pies to another finals campaign. Has kicked 28 goals to sit third for the competition but has also helped reinforce the Magpies’ back six with stints at centre half back. A versatile player and strong leader. Named in the team for a third straight season.

Jessie Williams (Clarence)
Clarence’s leading goalkicker with 21 from just 11 matches, Williams has added plenty of firepower to the ‘Roos in 2019. Impressing with her pace, goal sense and agility, Williams has spent much of the back half of the season as a high half forward.

Daria Bannister (Launceston)
The North Melbourne AFLW star has had another terrific Wrest Point TSLW season, booting 33 goals – second most in the competition. Has performed either as a forward target – where her contested marking has been on full display – or as a hard-working midfielder on the inside of the contest. A versatile player and a certified game-breaker.

Brie Rattray (Launceston)
The Launceston key target has enjoyed a sensational season, kicking 34 goals to be the competition’s leading goalkicker. A strong overhead mark, Rattray is rarely beaten and makes the most of her opportunities with an accurate, long kick. A first time Wrest Point TSLW Team of the Year selection.

Abbey Green (Launceston)
One of the competition’s very best rucks, Green is hardly beaten when it comes to hit outs or in general play around the ground. An outstanding overhead mark, Green can also drift forward to hit the scoreboard or bring her teammates into the game. Has a great work rate and hunger for the contest. This is her third consecutive Team of the Year nod.

Brieanna Barwick (Glenorchy)
In the Wrest Point TSLW Team of the Year for a third straight season, Barwick has continued to develop into one of the competition’s premier midfielders. Featured in Glenorchy’s best 12 times from 15 games and has impressed with not only her ball-winning ability but her tackle pressure, work rate and evasiveness.

Meg Sinclair (Launceston)
A classy half forward flanker, Sinclair is a strong contested mark but also impresses with her running capacity up and down the ground. Has kicked 13 goals but is also the Blues’ leader for goal assists.

Chloe Haines (Launceston)
A highly skilled outside player, Haines is another hard-runner with deadly foot skills. With a season as a North Melbourne AFLW player under her belt, Haines has again impressed at Wrest Point TSLW level with her run and carry, work rate and inside 50 entries.

Marla Neal (Tigers FC)
A midfield warrior, Neal has had another consistent season as the Tigers’ major ball winner. With a remarkable work rate and hunger for the contest, Neal is a standout clearance player, with a career-high 10 goals this season seeing her add another string to her bow.

Emily McKinnell (North Launceston)
A key power forward, McKinnell kicked 25 goals from 15 matches, including multiple goals on five occasions. Bags of eight and six underpinned a strong campaign. Fourth in the competition for goals, with her deadly accuracy from any angle making her a valuable part of this team.

Clarence skipper Grace Mitchell was unlucky to miss out on the team after a strong performance.

Spending most of her time forward of centre, Mitchell has been a terrific leader of a young finals-bound group.

Glenorchy forward Natalie Daniels was also unlucky after a another strong 23-goal season.

North Launceston ruck Sophie Townsend was another on the cusp of selection after a consistent season.