The 2019 Bupa Tasmanian State League (TSL) Team of the Year has been selected.

All seven TSL clubs were asked to nominate players they believed worthy of Team of the Year consideration. An assembled TSL panel then selected the best 22 of the 2019 season, with the consultation of coaches and external opinions, where required.

The selection panel picked the team and positions as if the team were to play a game.

The Bupa TSL coach and umpire of the year will be announced at the State League Awards on Saturday 5 October. 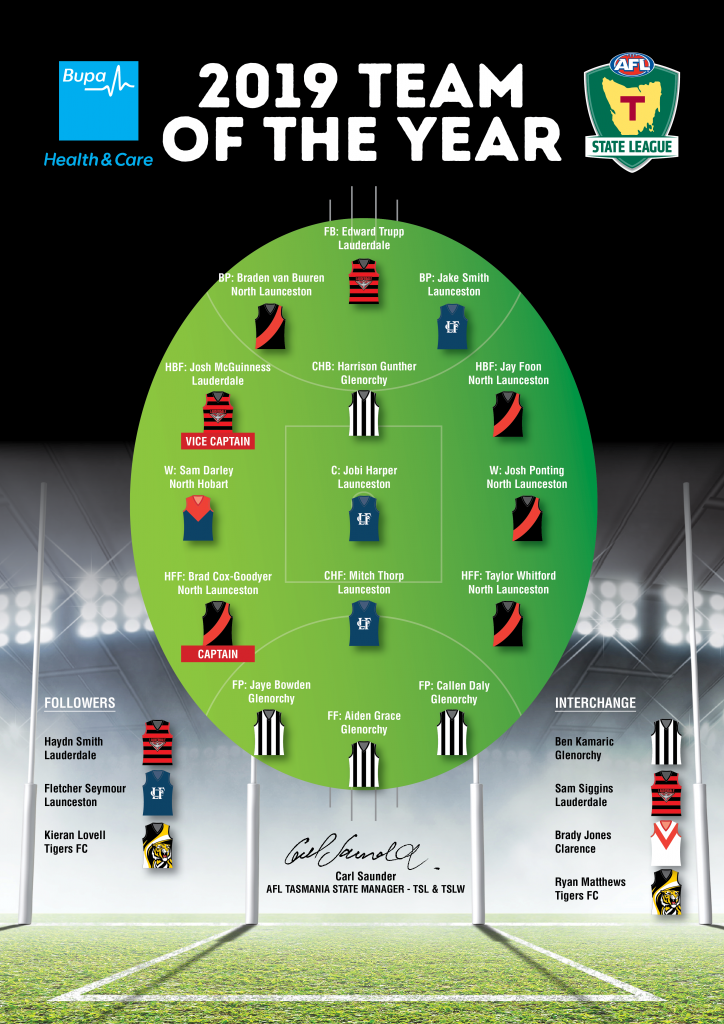 BACKSBraden van Buuren (North Launceston)
The former Devonport and Latrobe player has made a seamless return to TSL footy, quickly becoming one of North Launceston’s most consistent performers. Locking down a dangerous forward each week, van Buuren is equally important the other way, generating strong drive out of the back half. Precise with ball in hand, van Buuren can cut opposition teams to ribbons.Edward Trupp (Lauderdale)
Bursting onto the scene after moving to Hobart from South Australia, Trupp has emerged as one of the competition’s most dependable key defenders. Rarely beaten, Trupp’s elite closing speed and spoiling ability has seen him shut down some of the competition’s best forwards. Loves to get in the face of his opponents and create attacking opportunities.Jake Smith (Launceston)
One of the leaders of an inexperienced Launceston back six, Smith continues to improve as a multi-dimensional backman. Delivered superb lockdown roles on some of the competition’s best mid-sized forwards such as Hudson Medallist Aiden Grace; while also working as an architect of Launceston attacking forays. A fierce competitor, Smith is the sort of player others love to play with.

Josh McGuinness (Lauderdale) – VICE CAPTAIN
A genuine match-winner, McGuinness has become a Team of the Year staple in recent years due to his capacity to walk the tightrope between attack and defence. An ever-reliable kick, McGuinness has been at his most damaging when providing run and carry but has also sacrificed his own ball-winning ability to do the team thing and blanket potential opposing dangermen. A terrific leader, McGuinness deserves his place as vice-captain of this side.

Harrison Gunther (Glenorchy)
Emerged as one of the competition’s best key defenders last season and has only gone from strength to strength in 2019. Gunther is as good as any at reading the play and equally adept at shutting down an opponent and creating attacking bounce. Injury has curtailed the back end of his season, but Gunther has stood tall in the absence of fellow key defenders Josh Grant and Daniel Joseph, even taking the captaincy reigns throughout the middle of the year.

Jay Foon (North Launceston)
It was another standout season from the elite North Launceston running defender, with Foon successfully returning from a scary neck injury late in 2018. Rarely beaten one-on-one and lethal by foot out of defence, the Northern Bombers’ vice-captain is a crucial cog in a well-oiled machine. This is his third consecutive Team of the Year appearance.

Sam Darley (North Hobart)
The former GWS Giants, Western Bulldogs and Richmond VFL ball-winner made an instant impact at his old stomping ground, becoming his side’s designated user right across the park. With his laser-like kicking ability, experience and footy smarts, Darley regularly generated drive out of defence, finished things off inside 50 and won the ball at the source within the same game. Arguably the competition’s hardest runner.

Jobi Harper (Launceston)
The 2018 Team of the Year Centre Half Back has transitioned back into the midfield in 2019 and taken no prisoners. A midfield beast, Harper is ruthless in his appetite for the ball and damaging when it is in his hands. A strong-bodied utility, Harper often appears impossible to bring to ground, and as one of the Blues’ co-captains, has been enormous in developing the club’s next wave of finals-bound senior players.

Josh Ponting (North Launceston)
Described last year as North Launceston’s ‘fifth Beatle’, the 2018 Alastair Lynch Medallist has well and truly moved into the limelight to become one of the competition’s stars. Dominant week-in, week-out, ‘Punter’ has been as good as ever, consistently winning plenty of the football and making opposition pay with his deadly skills and elite work rate.

Brad Cox-Goodyer (North Launceston) – CAPTAIN
The RACT Insurance Player of the Year has gone from strength to strength in 2019, adding a fifth Bupa TSL Team of the Year appearance to his impressive CV.With 45 goals, Cox-Goodyer finished second in the race for the Hudson Medal, with his trademark cannon of a left boot leaving teammates, fans and opponents in awe each and every week.  Kept goalless on only two occasions, the North Launceston skipper was a model of consistency, to become a standout candidate as captain of the team.

Mitch Thorp (Launceston)
The 2018 Hudson Medallist had another strong campaign, booting 39 goals for the Blues. Often playing further afield, Thorp proved to be a crucial link-up player, and as coach, provided his younger teammates like Grant Holt and Alec Wright with plenty of crucial guidance. Kicked three or more goals on seven occasions to book a spot in the Bupa TSL Team of the Year for the fourth time.

Taylor Whitford (North Launceston)
The North Launceston coach finds himself in the Bupa TSL Team of the Year for a stunning sixth time – just rewards for another consistent season that has seen him spend more time forward of centre. Kicked a career-high 30 goals, including multiple goals on nine occasions. A bag of six in round one made his goalkicking prowess and intentions known from the get-go.

Jaye Bowden (Glenorchy)
Like a fine bottle of prestigious French red wine, the Glenorchy stalwart keeps getting better. A sensational 28-goal season has seen Bowden earn a ninth Team of the Year honour. As Glenorchy’s ‘Mr Fix-It’, Bowden has split his time between forward 50, half back and the wing in season 2019, acting as the Magpies’ ‘break glass in case of emergency’ weapon.

Aiden Grace (Glenorchy)
The former Clarence player has enjoyed a breakout TSL season in the black and white, making a big impact since returning from a stint in Geelong. Kicked 48 goals to claim the prestigious Hudson Medal, with his aerial marking, competitiveness at ground level and enthusiastic goal celebrations taking the competition by storm.

Haydn Smith (Lauderdale)
Few players in the competition cut as imposing of a figure as the Lauderdale big man. Smith has taken his game to another level this season, emerging as one of the Southern Bombers’ most important players. Smith makes his presence felt around the ground, with big marks, bonce-crunching tackles and hit-outs to advantage his bread and butter.

Fletcher Seymour (Launceston)
The former Clarence bull has made the most of his first season at Windsor Park, emerging as one of the state’s premier midfielders. Often copping a heavy tag, Seymour thrives under pressure, using his brute strength to help the Blues become a formidable midfield force. The old-fashioned midfielder was pipped at the final post to finish second in the RACT Insurance Player of the Year award.

Kieran Lovell (Tigers FC)
The former Hawthorn Hawk wasted no time in stamping his authority on the Bupa TSL, playing a crucial role in steering the Tigers to a maiden finals campaign. A goalkicking midfielder, Lovell snared 12 goals throughout the home and away season while dazzling with his strength, agility, classy skills and willingness to take the game on. Undoubtedly one of the competition’s most watchable players, Lovell’s distinctive ‘dancing’ around hapless opponents highlights his class and confidence.

Ben Kamaric (Glenorchy)
Arguably the competition’s most improved player, the 23-year-old has quickly emerged as one of the state’s most damaging midfielders. A clearance machine, Kamaric typically hits the ball at pace before generating dynamic run and carry. A strong-bodied midfielder, Kamaric is a star in the making, if he’s not there already.

Sam Siggins (Lauderdale)
One of the TSL’s most versatile players, Siggins has impressed as a big-bodied midfielder for much of the year. Capable of playing as a marking target inside 50, a ruckman or as a key defender, Siggins hasn’t missed a beat in his first season back at Lauderdale, delivering the goods in whatever role he has been thrust into. Can provide ruck assistance to Haydn Smith in this team, as well as another avenue to goal.
Brady Jones (Clarence)
One of the competition’s most consistent midfielders, Jones has worked tirelessly in 2019, shouldering the bulk of midfield responsibility as the captain of an inexperienced unit. The 30-year-old has been a workhorse all season, doing the work on the inside and outside. There are few better leaders in the competition.
Ryan Matthews (Tigers FC)
An underrated, but ever-consistent midfield warrior, Matthews delivered one of his strongest campaigns to create a formidable partnership with teammate Kieran Lovell. Usually found doing the tough stuff at the bottom of packs, Matthews is as tough as nails and brings a no-nonsense approach to the table week-in, week-out. A well-deserved second appearance in the Bupa TSL Team of the Year after being named on the interchange in 2017.

SELECTION HEADACHES WERE HAD!

The 2019 Bupa TSL season was full of standout performers and performances, ensuring the selection panel had some difficult decisions to make.The biggest selection conundrum centred around the back six, with Glenorchy stalwart Josh Arnold, Tigers veteran Marcus Davies and Northern Bomber Arion Richter-Salter all strongly considered for a mid-sized defensive spot.

The trio were all heavily discussed due to their strong campaigns, but the combination of Smith, van Buuren and Foon, was preferred due to their consistency across the season.

Another North Launceston defender in Connor Young was also a strong contender after holding some of the competition’s best key forwards quiet throughout the year. Although on the cusp, the offensive capacity of Gunther, McGuinness and Trupp saw him just miss out.

Lauderdale pair Nat Franklin and Robbie McManus were also well and truly in the frame for selection, with Franklin a key member in Lauderdale’s strong engine room and McManus playing a variety of creative roles on the outside. Glenorchy mid Rhys Mott was another player on the cusp, but the strength and depth of the selected midfield groups made it difficult to find these players a spot in the 22.

As always, the ruck battle was strongly debated, with Lauderdale big man Haydn Smith getting the nod ahead of Northern Bomber Alex Lee.

Lee, the Tasmania Devils U25 State ruckman, has had another impressive season, but Smith’s remarkable consistency and capacity to make his presence felt around the ground made him the standout contender.

North Hobart focal point Colin Garland was another unlucky player, with the star Demon just missing out for Launceston coach Mitch Thorp due to consistency of work across the entire season.