North Launceston captain Brad Cox-Goodyer has emerged as the winner of the prestigious RACT Insurance Player of the Year award for season 2019.

Cox-Goodyer capped off a sensational home and away season with a two-vote performance in his side’s 51-point win over Glenorchy on Saturday to take his season tally to 21.

It was a hotly contested leaderboard all season, with Cox-Goodyer’s final round efforts seeing him leapfrog Launceston midfielder Fletcher Seymour for the award, with the star Blue finishing one point behind on 20 votes.

Cox-Goodyer polled in 10 matches this season, including three best afield performances in a year that also saw him boot 45 goals to finish second in the race for the Hudson Medal.

Cox-Goodyer’s RACT Insurance Player of the Year honour is another addition to one of Tasmanian football’s most decorated resumes.

“On behalf of RACT Insurance, I would like to offer our wholehearted congratulations to Brad Cox-Goodyer on taking out this prestigious award.

“Brad has been one of Tasmanian football’s brightest talents for a long period of time and he is a worthy recipient of this award after another sensational season as a goalkicking midfielder.

“As a Tasmanian company and a member of the Tasmanian community, RACT Insurance is proud to support the TSL and the many participating football clubs who play such an important role in our local communities across the state.”

“Brad has had a superb season as captain of the competition’s minor premier. For Brad to have such an influence on the scoreboard with 45 goals largely as a midfielder is evidence of how dynamic of a footballer he is.

“Brad is a fantastic representative for our competition, and his capacity to be a match-winner over such a long period of time is a credit to himself and the North Launceston Football Club,” he said.

“I would also like to thank RACT Insurance, in particular, Trent Sayers for their continued support of this award and the performance of players in our competition.”

The award is voted on by members of the media, who award 3, 2 and 1 votes after every TSL match. The RACT Insurance Player of the Year receives $2,500 cash and a $2,500 travel package. 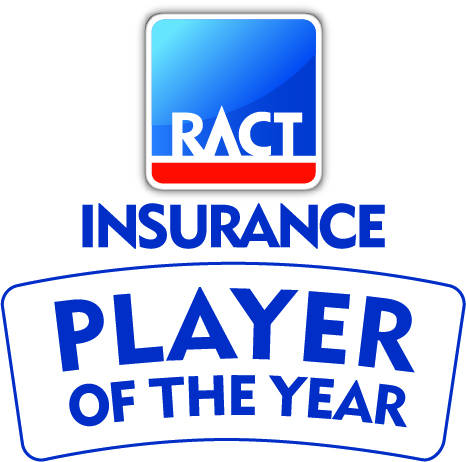