Round four of the Wrest Point Tasmanian State League Women’s season saw North Launceston defeat the Tigers, Launceston come out on top of Clarence and Lauderdale go down to Glenorchy by 155 points.

Olivia Clayton looks at the key talking points from each game.

North Launceston continued their strong form, defeating the Tigers by 61 points to remain in third spot on the ladder.

Assistant coach and player, Maggie Cuthbertson was full of praise for the effort, acknowledging the continued improvements the team is making in its first TSLW campaign.

“The team went well. I think it’s helped that we’re getting to know each other better, learning how our teammates play and what each players strengths are.

2. Tigers struggle for most of the game but come back in last half

The Tigers struggled for most of the game but in the fourth quarter were able to kick one goal two, to North Launceston’s one goal.

Tigers coach, Brad Willis reiterated that the team has to start games in stronger fashion, but also saw positives from the second half effort.

“Even though I thought our preparation was as good as its been, we again started slowly and effectively played catch up all day,” he said.

“It’s been a pattern in all three games where we have been jumped in the first, stemmed the tide in the second, and had competitive second halves”.

“After a slow start, midfield drivers Marla Neal and Cara Brooke lifted their intensity after half time and were responsible for leading the comeback. Third gamer, Maggie Bones, continues to build and her tackling and hands off the deck were first rate for such an inexperienced player.

“Young gun, Maci Polley, put together another eye catching performance and has been invited to train with the Devils.

“Another teenager, Ella Brereton, put together her third straight consistent performance and her composure of half back has been a feature. After making the jump from the SFLW, Paige Flakemore is quickly establishing herself as a hard nut, consistently racking up double figure tackles and kicking the ball in the front half.”

The first quarter saw a tight contest, with Launceston having a two-point lead going into the second quarter.

Frustrations from both sides started to show in the beginning of the second term, and the Roo’s only kicked one point to the Blues three goals and three behinds. Launceston kicked four goals three in the last half to win by 42 points.

Chloe Haines was the Blues leading goalkicker booting two, and Daria Bannister was named as their best on ground.

Launceston is the only team to have won all their games so far this season and is sitting on top of the ladder as a result.

2. Clarence struggle against the Blues

Clarence drop down to fourth place on the ladder behind North Launceston after going down to Launceston by 42 points.

The first quarter was a tight tussle and the Roo’s only goal of the term came when Hannah Scott was awarded two 50 metre penalties. For most of the game it was like a tennis match with the ball moving from end to end, with Launceston delivering more on the scoreboard in the last three terms.

Maddy Smith provided some entertainment in the third quarter when she attempted a handstand to put off Launceston’s Brie Rattray, which essentially worked, because Rattray only kicked a behind.

Glenorchy just seemed to be all over the ground to intercept the ball. They kicked 8.1 in the first quarter, and continued to kick multiple goals each quarter, to win by 155 points.

The ball appeared to be attracted to Natalie Daniels who kicked six for the Pies. Madison Shaw, Macklyn Sutcliffe, Elise Barwick and Georgie Bailey all kicked three goals apiece, with Sarah Skinner named as best on ground continuing her good form this season. 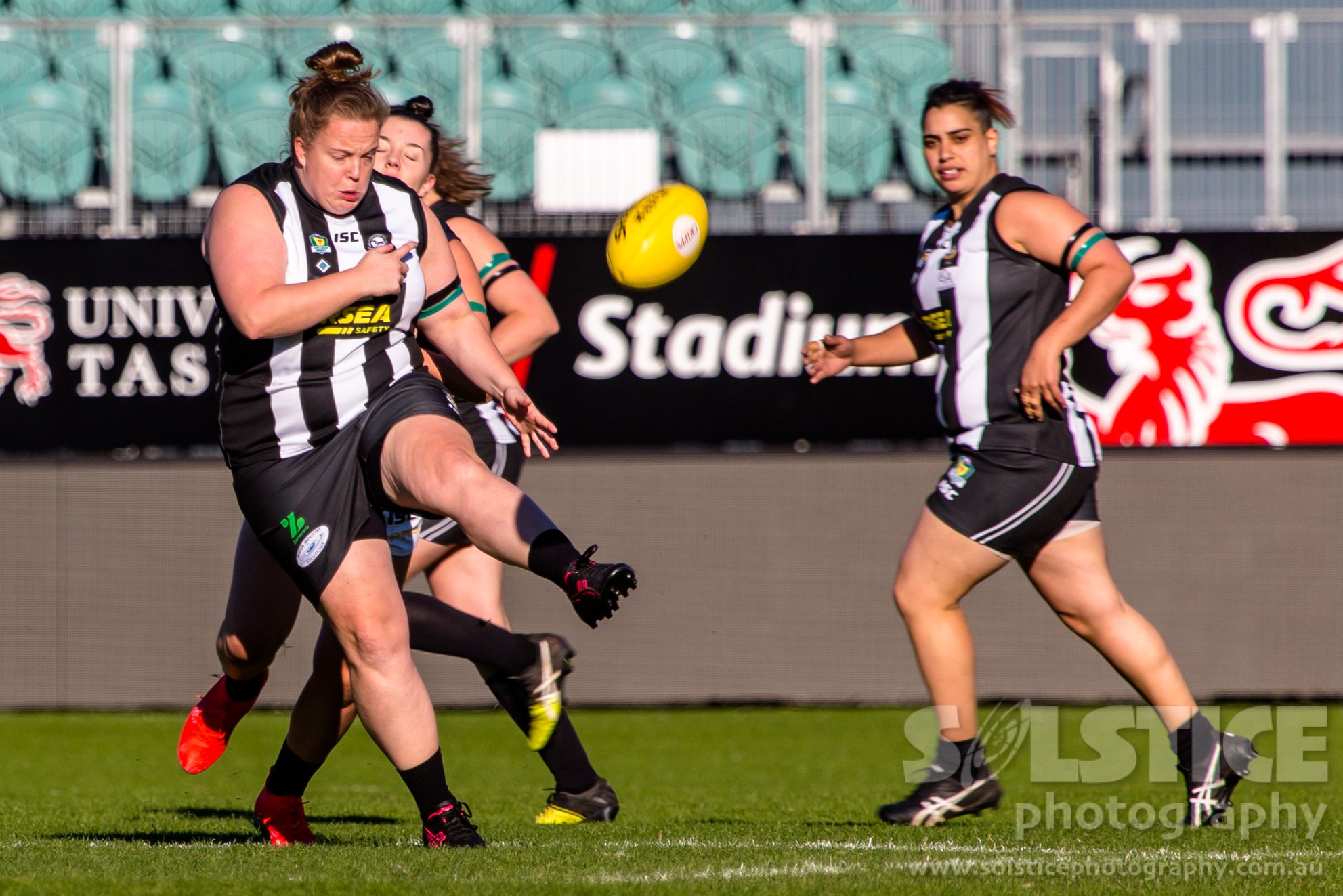 Lauderdale’s second quarter was probably their best, only allowing the Pies to kick 4.2.

Lauderdale have struggled to get something on the scoreboard so far this year, having been kept scoreless in rounds two and three. Olivia Hudson changed all that when she kicked Lauderdale’s first goal of TSLW football in the second term.

Claire McManus and Katie Teders were Lauderdale’s top two players on the day.